The storied history of the Village of Milton begins with the decision by Joseph Goodrich to homestead on the du Lac Prairie from his native state of New York in 1838.Goodrich staked his claim at the crossing of two militia trails still worn from the Blackhawk War six years prior. It was at this crossing where Goodrich built his Milton House inn, a decision that not only resulted in the construction of what still stands as Rock County’s only National Historic Landmark, but also spawned two villages that eventually grew into one city and a small liberal arts college that fed the minds and hearts of people all over Southern Wisconsin for more than 135 years.

Goodrich’s early inn and family dwelling consisted of two wood frame buildings and a log cabin that was constructed in 1837 about eight miles to the east and moved to its current location. While planning construction of a more permanent inn and home, Goodrich was busily platting a town. He designated land he had secured for a park and square. He gifted other land for a church for the Seventh Day Baptists whose growing congregation had been meeting for services in the Goodrich home. He also dedicated land for a cemetery and school.

Goodrich decided to construct his inn and apartment/business block with readily-available materials indigenous to the area. He settled on the unique idea of constructing buildings from poured grout, made from the sand and limestone prevalent in the area. Another unique architectural feature of Goodrich’s creation was his decision to make the inn portion of the building a hexagon with a long wing extending off the south side of the inn. One section of the five-block business wing survived a 1948 collapse but the hexagon inn remains the oldest poured cement building in the United States.

While operating his temperance inn, Goodrich worked through the Milton Seventh Day Baptist church to promote political participation in the cause of abolitionism. While publically advocating on the issue of abolitionism, Goodrich also acted discreetly in supporting radical abolitionists and sheltering fugitive slaves at the Milton House.

The hexagon inn was completed in 1845 and with the 1849 construction of the Goodrich Block, the fledgling village had a center of commerce and activity. Milton’s first post office was in the complex, which was soon attracting dozens of stage coaches per day.

It was from this complex that the community began growing to the west. Goodrich utilized the business block of the Milton House as a precursor of a modern day strip mall and business incubator. Proprietors operated businesses on the ground floor of the wing and could live in the second-story apartment. Established businesses often moved across the park to what would become a busy business district.

ACADEMY SHAPED THE COURSE OF THE VILLAGE

Understanding the importance of and need for higher education in his new community, Joseph Goodrich founded the Du Lac Academy in 1844, a decision that intertwined the village with what became Milton College for the next 138 years of the school’s existence.

The academy building was built near the northwest corner of the public square across what is now North Goodrich Park from the Milton House. Constructed before the Milton House and when there were just four dwellings in the village, the academy building was the first structure Goodrich built using poured grout, costing about $300. Goodrich managed the school and bore its expenses during its first years. The academy opened as a select school in December, 1844, the Rev Bethuae C. Church as its first teacher. Tuition was three dollars per 11-week term, of which there were three a year. Board with private families was a dollar per week. There were 67 students, 40 men and 27 women.

The success of the academy proved its worth to the community. In the winter of 1847-48 a group of citizens combined to secure a charter, placing it under the control of a board of trustees.it was named The Du Lac Academy, a name that was never popular nor used beyond securing of the charter.

Beginning with the fall term of 1851, Ambrose Coats Spicer headed the school for seven years. Spicer was active in abolitionist activities and joined the Union Army in 1860, first serving as an honor guard at the Lincoln inauguration before fighting in the Civil War. Spicer cultivated local support for the academy and in 1854 a new charter was obtained from the state legislature named Milton Academy.

The old grout building became untenable and classes were held in private residences until the fall of 1855 with the completion atop the village hill of the brick building that still stands as Main Hall.

Statehood was but a year old when grading for a rail line heading west out of Milwaukee began and soon was in need of funding. Goodrich attended a meeting of shareholders of the Milwaukee and Mississippi Railroad and voiced his willingness to mortgage his property to invest in the rail line. He challenged others in communities between Milwaukee and the Rock River to do the same. Goodrich invested $3,000 in the rail line and others followed suit. Soon tracks were being laid from Waukesha to Palmyra to Whitewater, to Milton, Edgerton and eventually reaching Prairie du Chein.

The first train was pulled through Milton in 1852 on the new Milwaukee-Mississippi line and Goodrich gifted land for the right away and depot. The rail did much to open up the country and spur growth in Milton, which soon saw as many as thirty passenger trains per day roll through one of Southern Wisconsin’s major rail hubs. Area farmers had a modern-day transportation outlet to get crops and livestock to market. 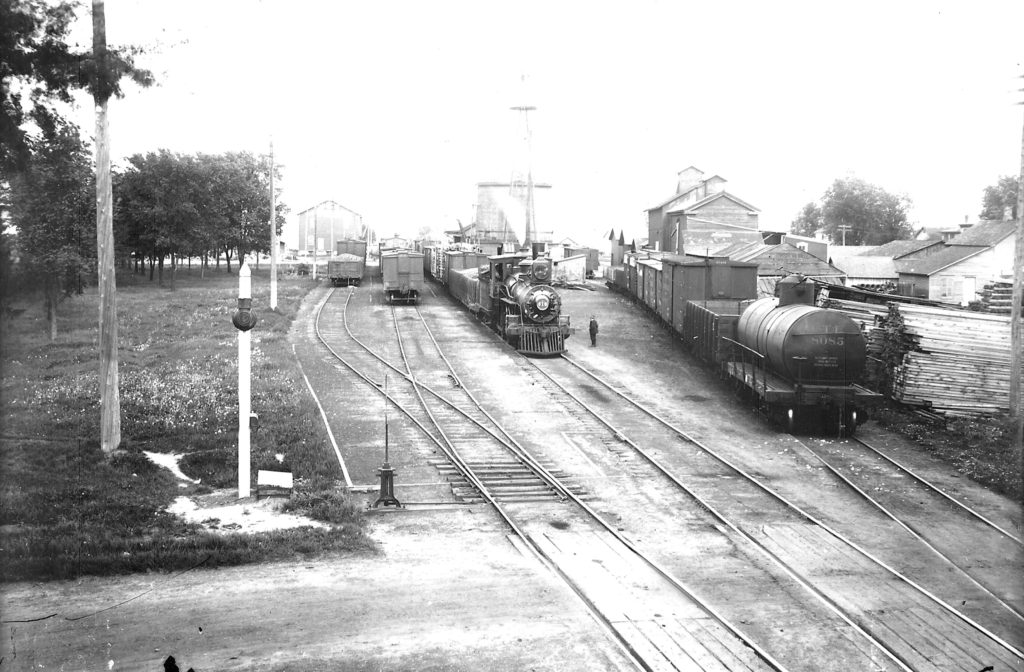 The Village of Milton’s downtown began blossoming as late as the 1870s as shops, stores and other forms of services and commerce, including the post office moved away from the Goodrich Block and across the square to locate along what is now Parkview Drive.

A number of wood frame buildings spanned Main Street north and south of College Street. The first permanent brick structure along Main Street was the Bank of Milton building in 1884. A series of wood frame buildings extended south to College Street. The first was a building in which brothers W.P. and W.W. Clarke operated stores for books and stationary and a pharmacy. The building also housed the post office. The next building to the north visible in the accompanying photo, was brought to that location in the 1870s. In 1884 the building was sold to TI Place who for 55 years sold jewelry, china, musical instruments, clocks and watches from that location until his death in 1940.In 2018, the building houses Rockie’s Pizza and Subs. 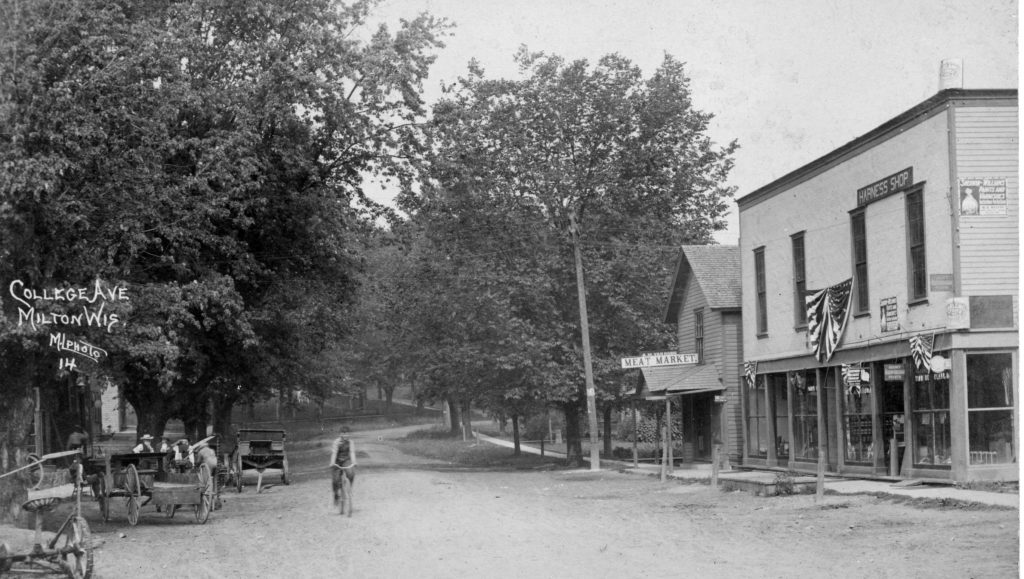 It wasn’t until the 1890s that the large brick building north of College Street were constructed. The building at the corner of College and Main Streets is the Dunn and Boss building, erected in 1891. Fredrick Dunn was the son-in-law of Robert Williams, a long-timer merchant in the Goodrich Block. In 1887, Dunn opened a clothing store in the block adjacent to Williams’ store. He then partnered with George Boss to open a clothing store and grocery store in the new building. The photo below shows a combination of horses and buggies up and down Main Street in the early 20th Century.

In 1904 an application was made to incorporate Milton as a village. A survey had been made by Alfred E. Whitford to show the distances and boundaries of the area to be included within the village was 982 acres. An accurate census verified by Jonas B. Tracy on May 3, 1904, showed the population of the proposed village was 813.

In an election held in September of that year, the incorporation carried by just 26 votes, 111-85. A headline in the September 15, 1904 Milton Telephone proclaimed “Milton Stands for Progress”. The story reporting the news editorialized on the issue stating “Milton today has taken its first and most important step toward becoming a thriving and energetic business center and the ‘citizen of the village of Milton’ as he sits down to his evening meal, may well feel proud of his little city which today declared itself for progress by deciding for incorporation by a vote of 111-85.”

A month following the vote, village officers were elected. J. B. Tracy was the first president of the village and trustees included A.T. Alexander, W.B. Maxson, W.A. Chaney, O.E. Orcutt and M.C. Whitford. 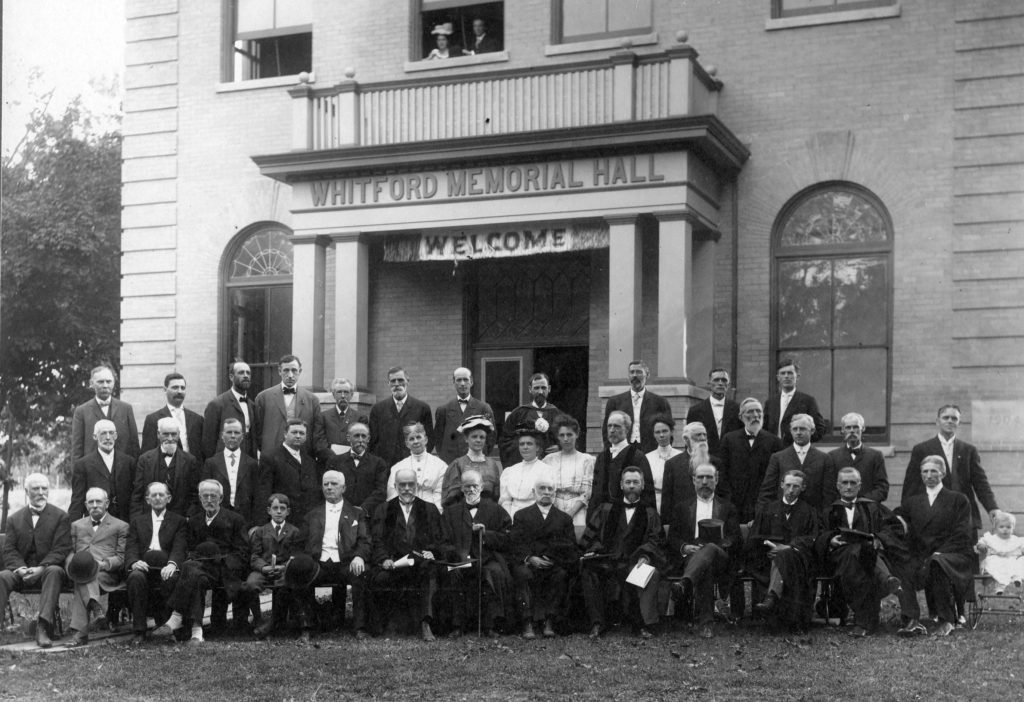 In hindsight, it’s difficult to argue with the opinion stated by the Telephone in reporting the vote, taking into account the considerable progress made by the village in the 15 years after incorporation. Whether related to the incorporation or not, by 1919 the village purchased its own village hall; entered into a contract with the Milton Water, Light and Power Company to furnish electric current for street lights, replacing oil lamps; realized the construction of a new rail depot; facilitated the construction of two large commercial buildings – the Whittet building on Main Street and the Maxson building on College Street; and saw two major construction projects on the Milton College campus with the addition of Whitford Hall and the Daland Center. 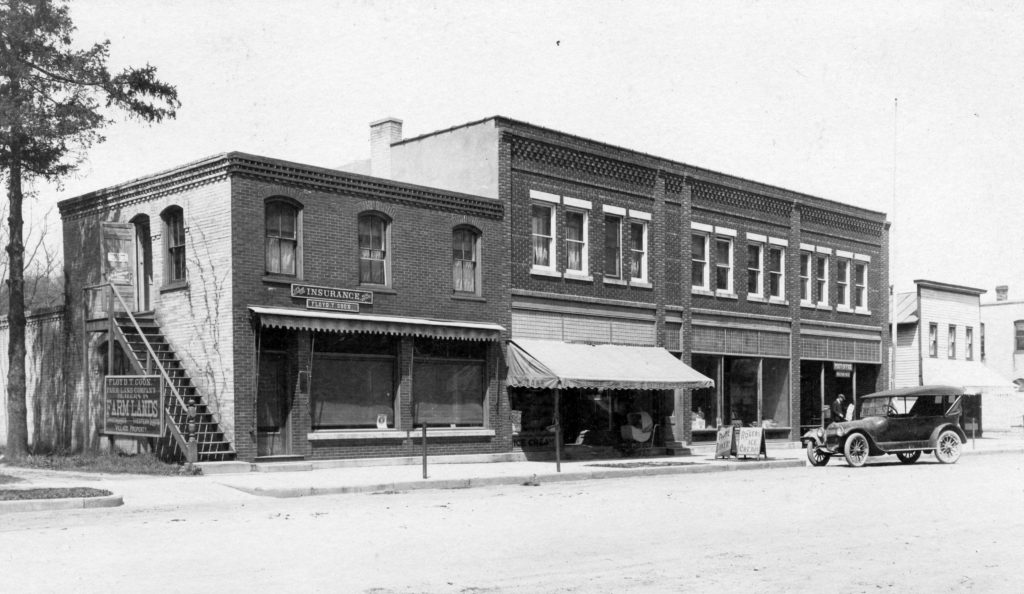 Village downtowns thrived across Southern Wisconsin during the pre-mall world of the 1950s and ‘60s. Certainly, Milton’s Main Street was no exception, especially when it was being fed the appetites for goods and services of a thriving liberal arts college. During this time in the history of the village, patrons could find most of life’s necessities along Main and College streets. The streets were home for two banks, two grocery stores, a couple of cafes, a variety store, two hardware stores, a pharmacy, shoe store, car dealership, the Power and Light office, soda fountain, post office, barber shop, laundromat, doctors and dentists offices and a lumber yard. There were no fewer than a half dozen automobile service stations in the village.

Every year, seemingly, the village wound its way closer to the inevitable merger with its sister village of Milton Junction in 1967. A watershed moment in the evolution of generational acceptance of the merger occurred in 1920 with the construction of Milton Union High School.

9 thoughts on “Village of Milton history in words and pictures”