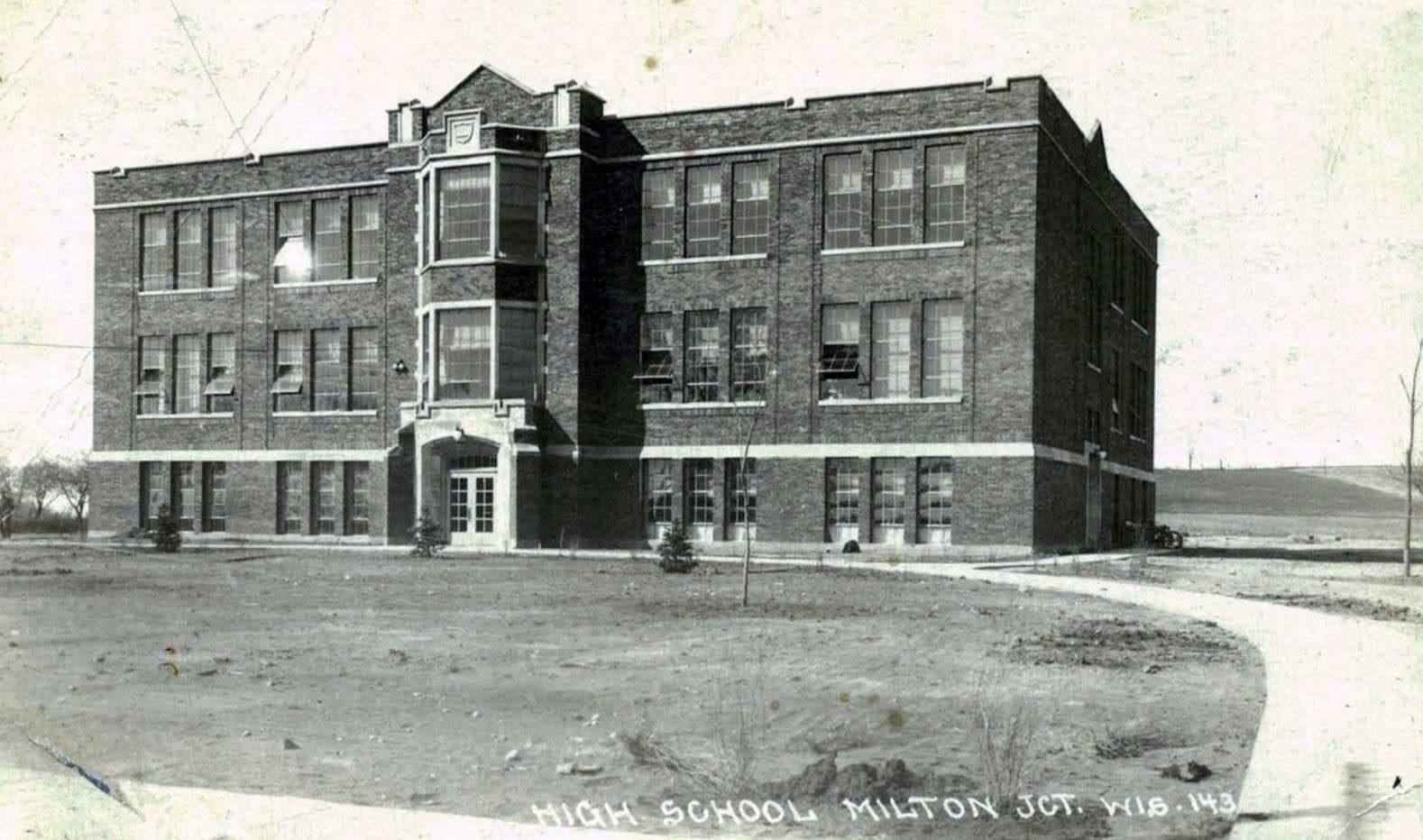 In 1920 the villages of Milton and Milton Junction came together to build Milton Union High School for students from the two villages and surrounding townships. The building served as a four-grade high school for 45 years until the current Milton High School opened in 1965. The building then served as a two-grade junior high until the old three-story, 1920 portion of the building was razed in 1980. A two-story school was built on the site which continues to serve as the school district’s two-grade middle school. 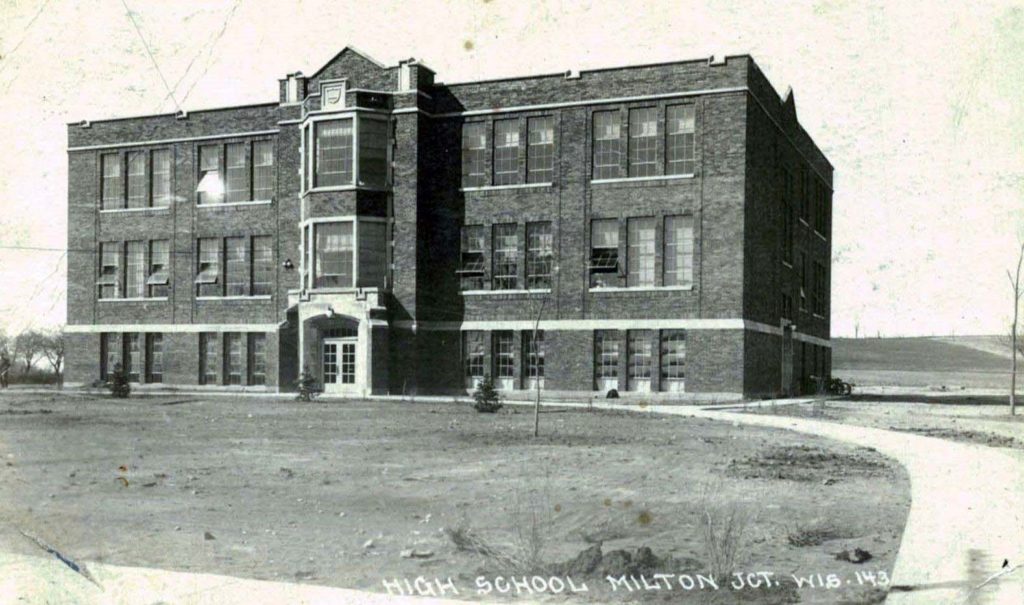 Milton Union High School perhaps had more to do with the eventual unification of the villages of Milton and Milton Junction into one municipality in 1967 than did any other social factor. For the first time, students from each village, along with kids from the rural townships, were sharing the same class rooms, athletic fields, stage and lunch room.

The swinging open of the school’s doors in 1920 served as a unique social transition for the community’s high-school-aged generation. At the time of the building’s demolition 60 years later, Mike Flaherty, editor of the Milton Courier newspaper, offered a guest column by one of the 1920 students. The piece appeared on the inside pages of the October 16, 1980 Courier that featured a front-page photo of a wrecking ball taking down the old building. The essay threw a great deal of light, perspective and humor on that transition to a new, modern high school experienced by about 200 area students. It is one of the best dissertations we’ve come across relating the first few years of the new school. Charles Wileman, some 60 years removed from his high school years in the brand spanking new building, is the author. I don’t know anything about Mr. Wileman except to say the person I suspect who wrote the piece was born in Lima Township in 1905 and passed away in Whitewater in 1993. If anyone has any information to share about Mr. Wileman, I’d love to hear it. Mr. Wileman’s remembrances, presented here, were equal parts witty, nostalgic, insightful and sentimental. Take a few moments and read it carefully. Any long time Miltonian is certain to be entertained. 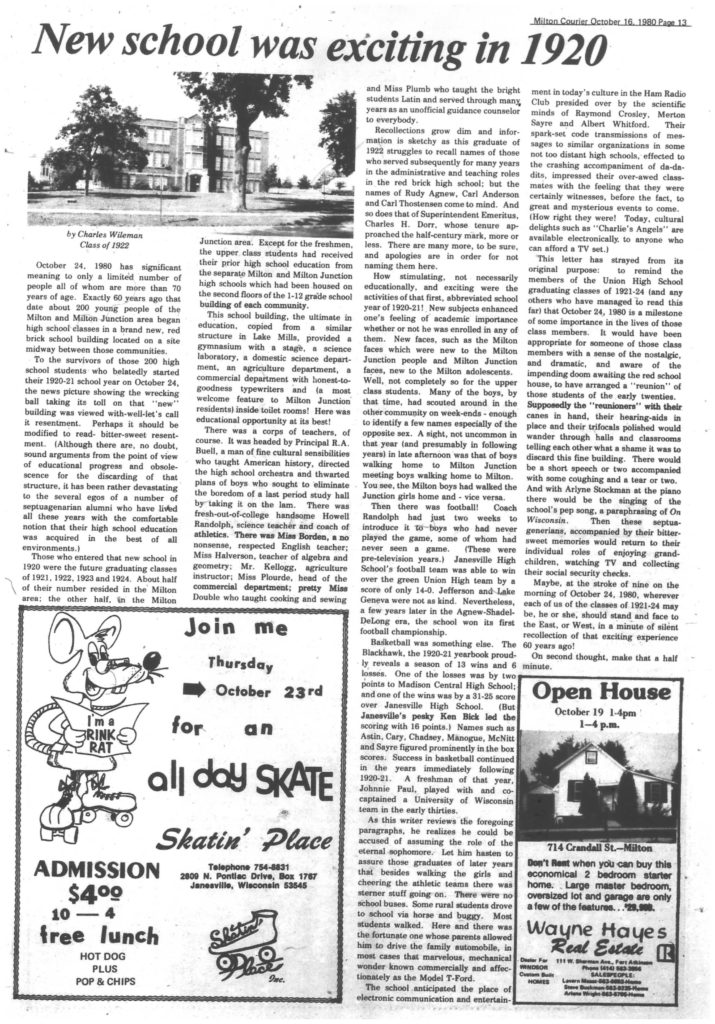 Here’s a few things that jumped out at me:

 A total of about 200 students from Milton, Milton Junction and the surrounding rural area made up the entire four-grade high school. By the time students my age were attending junior high in the building during the late 1960s, it housed just two grades and well over 300 kids.

 The school was still being completed that fall and did not open until Oct. 24 in 1920.

 Johnnie Paul was the grandson of Alexander Paul, who founded the Farmer’s Bank. His father, John Paul, has a well-known road named for him. Johnnie Paul was the captain of the University of Wisconsin basketball team that played the very first game in the UW Fieldhouse in the early 1930s.

 Due to the late school start, the first Unionite football team did not begin practice until October. The Unionites, comprised of many players who’d never even seen a football game before that fall, lost the three games played that season. A photo of that first team is posted here. Sorry, we don’t have names except for the gentleman we assume to be the coach – “Fresh-Out-Of-College Handsome” Howell Randolph. That’s Mr. Wileman’s description. Howell Sheppard Randolph was a 1920 graduate of Milton College and taught at the new school for two years before earning a medical degree from John Hopkins University in Baltimore. In 1928 he moved to Phoenix, AZ and helped establish St. Luke’s Tuberculosis Sanitarium. When the facility became St. Luke’s Hospital, Dr. Randolph served as its first medical director. 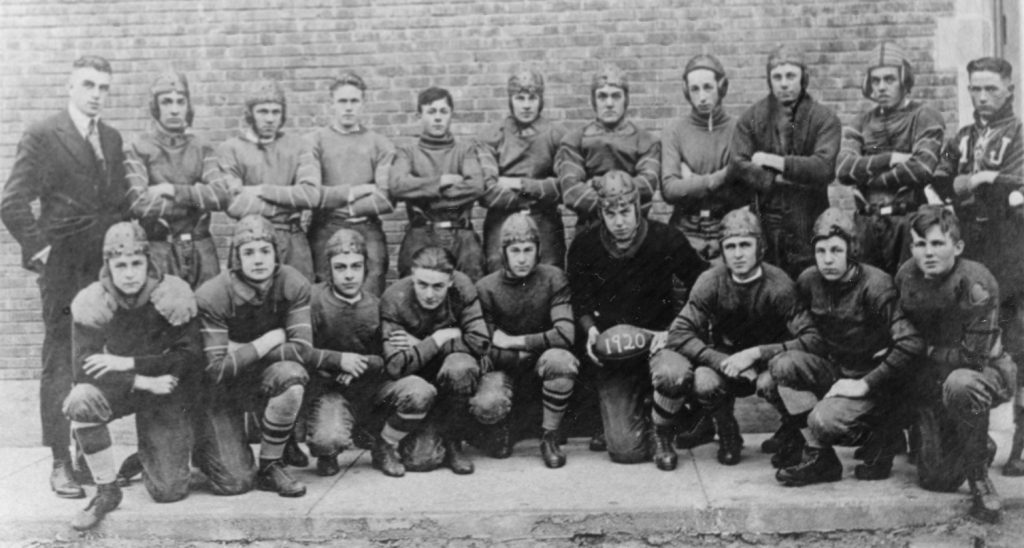 The beauty of Milton College is that our small town was often advantaged by guest appearances from people such as Dr. Howard Randolph who hung around for a couple of years to teach school.