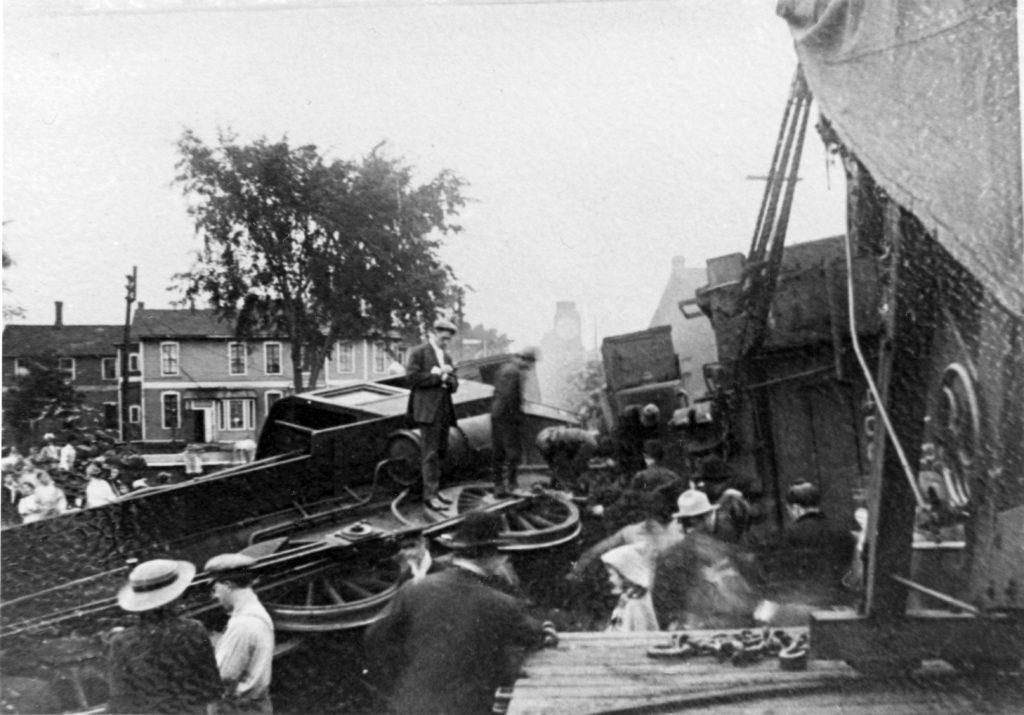 Working the rails and traveling by train 120 years ago is a concept that often gets overly-romanticized in our more modern times. Truth is the big Iron Horses of the 1800s and the early decades of the following century were oft-times not the safest implements of travel to be around – either for rail workers and, at times, the passengers. Riding and working the rails was a dirty, noisy and, by today’s standards, dangerous proposition.

That was certainly true locally as Milton and Milton Junction became early regional rail hubs during the latter portion of the 1800s. Joseph Goodrich is credited with helping to facilitate the Milwaukee & Mississippi rail line through Milton in 1852. The east-west line eventually stretched from Milwaukee to Prairie du Chein. In 1858, the Chicago, St. Paul and Fond du Lac road, a north-south line, was constructed through what was then called West Milton, creating a busy junction at its intersection with the existing Milwaukee & Mississippi.

Over the next several decades, rail traffic increased. Freight and passenger trains passed through the villages with great frequency, turning Milton and Milton Junction into true railroad towns. During the 1880s and onto the early 1900s, Milton Junction saw as many and 30 passenger trains come through on a daily basis. Some evenings as many as five trains laid overnight at the Junction’s Morgan House Hotel and depot.

Just as rail traffic increased in a relatively new and unregulated travel and freight industry, so too did the number of mishaps, injuries, derailments, collisions and fires along the local rail lines. Although not officially logged, some of these incidents were recounted in brief blurbs in Milton’s weekly newspaper.

 “Sparks from the railroad set fire to and burned a stack of straw belonging to S.B. Hazard.” – Milton Express, Feb. 15, 1882
 “Smashups on the St. Paul road have been too numerous to mention, of late. The section boys came in for their share. They ran into something the other day near the junction, no lives lost.” – Milton Express. March 1, 1883.
 “Train No. 30 on the Northwestern road ran into a flock of sheep, 75 in number, killing and injuring 33. They were the property of J. W. and E.H. Wentworth.” Weekly Telephone, Sept. 9, 1884.
 Will Crowley lost both limbs in railroad accident in Chicago. He was the third Crowley family member to lose limbs in railroad service. Will had only been married two weeks.” – Weekly Telephone. Sept. 18, 1912.

Those entries represent just a sampling of the brief railroad notations found by Milton Historical Society researcher Rod Hilton as he peruses Milton’s newspapers during his on-going project cataloging the community’s obituaries.

Without a doubt, Milton’s most tragic railroad event occurred prior to the establishment of a newspaper in Milton or Milton Junction. On January 4, 1864, the boiler of a wood-burning locomotive exploded while sitting on the tracks outside of the Morgan House in Milton Junction, killing two people and severely injuring more than a dozen, eight severely.

The explosion occurred outside of what is today Klig’s Union Depot and across Merchant’s Row from First Community Bank. The north-south tracks on which the incident occurred were abandoned by the railroad in the 1960s. According to a front-page story that appeared in the January 5, 1864 Janesville Gazette, the explosion occurred in the engine of a freight train known as The Gladiator as it sat adjacent to a couple of occupied passenger cars sitting on a parallel track.

The wounded were described as being “shockingly mangled” and scalded from the water of the exploded boiler. The dead included one man from Fond du Lac and another from Watertown. The story also notes that the rail company, upon receiving word of the incident, dispatched a train from Madison with doctors, nurses and medical supplies.

A modern observation of note is the fact so few physicians were known to have been in the Milton area at the time. Dr. William Borden was in Milton in January, 1864. He was about ten months away from accepting a Union Army commission as a surgeon at a Virginia hospital toward the end of the Civil War. The History of Milton Junction, compiled in 1949, reports that Milton Junction did not have a physician until Dr. James Coakley arrived in 1865 following his discharge from the Civil War.

There are no known accounts of how so many injured were treated or how crude the triage situation.

Fact is, it may be happenstance we have available the few details the Gazette provides. It’s evident from the story that its writer was on the train and was witness to the tragedy.

It’s fortunate no other known mishaps along Milton area rail lines resulted in fatalities. Derailments were many and on occasion a locomotive was laid on its side. It’s difficult to track all of the area’s major rail mishaps but there are a few that can be confirmed through photos that exist in the archives at the Milton House Museum. Some of the photos are accurately dated and the incident can be checked against other sources, such as newspaper accounts. In his diaries, Ezra Goodrich often commented on rail mishaps. Goodrich had a long-standing feud with rail companies and appeared to take every opportunity to snark at rail officials.

One such incident occurred on Friday, September 20, 1907 when a southbound train on what was then called the Northwestern road, blew through the gates at the junction crossing of the Milwaukee line, right outside of the Morgan House. The southbound locomotive struck a freight train along the east-west tracks. The locomotive overturned, coming to rest along the tracks in the area that is now just west of Elm Street.

The incident was described in the September 26 issue of the Milton Telephone.

“Early Friday morning a southbound freight on the Northwestern Road, in charge of conductor Petrie, crashed through the gates at the crossing and into a Milwaukee Road freight which had pulled onto the crossing. The engine struck a heavily loaded car of coal, with disastrous results to both. The car of coal was unceremoniously dumped on the side of the track while the engine rolled over and ploughed headlong into the gravel on the other side. . .

“. . . The train took the first gate across the St. Paul tracks out and hit the second gate just as it went into the St. Paul train. There were four men in the cab of the engine, but one, a brakeman, jumped before the collision. The other three were still in the cab when it rolled over.

“All escaped practically unhurt, a fact which railroad men who viewed the wreck declared to be almost a miracle.”

The following photos show the aftermath of the wreck. The first photo is taken looking north and the Morgan House can be seen in the background on the left side of the frame. The man standing on the wheel of the tipped locomotive is likely a rail official as he compiles a report. Of note is how onlookers, including children, were allowed an up-close look of the damage. 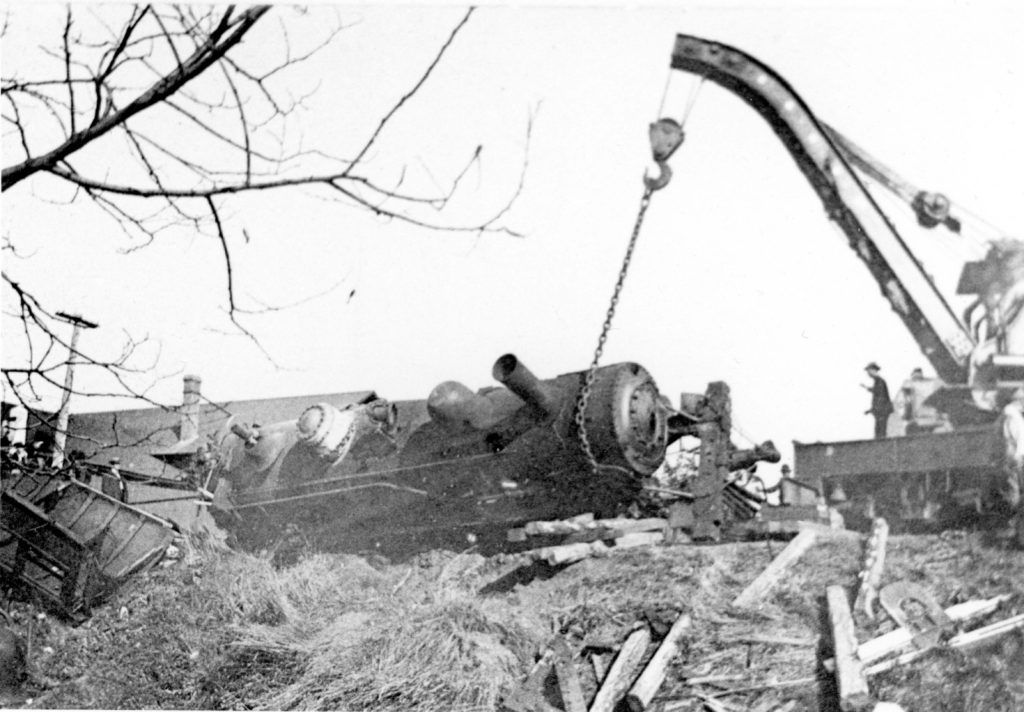 The story noted that cleanup crews were on the scene almost immediately and in the afternoon, a derrick had been dispatched from Madison to right the upended locomotive.
Goodrich’s observations of the incident were noted in his diary.

The newspaper account ended by noting the incident may lead to the installation of interlocking crossing gates. The article appeared to lament the notion of the safety feature by predicting such a move will discourage passenger trains from stopping in the Junction. It’s unclear how the interlocking gates would have prevented the September 20 collision or why it would impede passenger service.

“This is the second bad wreck which has occurred at the crossing in the past two years,” the Telephone noted. “Talk of an interlocking crossing is strong among railway men. Should this be done, it would doubtless result in at least some of the passenger trains running through without stopping here.”

The Milton Historical Society archives also contain a set of photos from a November, 1909 incident when a southbound train ran off the rails just south of the junction crossing. The following three photos offer views of that mishap. The Milton Telephone contains the following brief account.

“An engine tender and one car left the rails at the “derail” at the north end of the Northwestern yard here Tuesday morning,” the newspaper account reads. “The engine buried itself in the rain-softened grade. A wrecking crew cleared the track.” 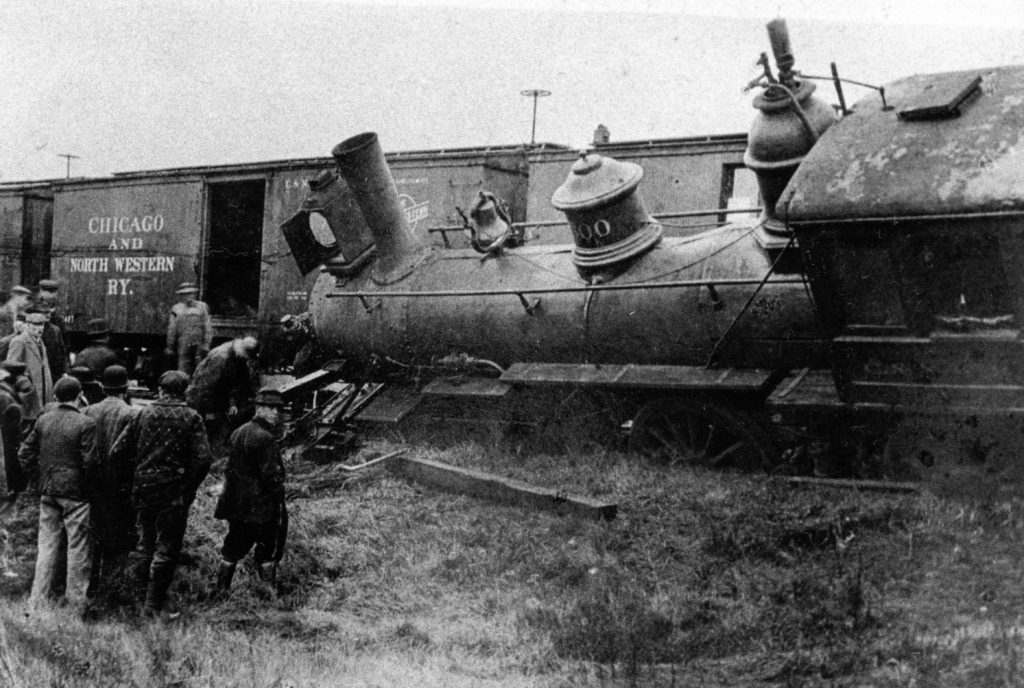 Another set of archive photos record the spectacular images of a rear-end collision of two trains along what was called the “Y” in 1912. The “Y” still exists and is used daily by rail companies. The “Y’ accommodates eastbound trains making the sweeping turn south toward Janesville and northbound trains making the turn east toward Milwaukee. For an eastbound train the “Y” begins to split from the main line at Hilltop Drive near the post office. The “Y” rail crosses Municipal Drive and then John Paul Road near Dave’s Ace Hardware.

It was at the vicinity of Ace Hardware where on November 19, 1912, a one-car passenger train from Janesville ran into the back of a freight train sitting stationary on the “Y” tracks. The Telephone gave the following account of the mishap.

“A wreck on the south Y attracted a number of sight seers from the villages Tuesday morning. The “dog run” crew running up from Janesville with only a single passenger coach at about 5:45 a.m. smashed into the rear end of a freight train standing on the Y track. The caboose was telescoped by the engine, and the engine lost her stack and was otherwise uninjured. The box car next to the caboose was completely smashed into kindling wood. Luckily no one was in the caboose and no one was hurt, the engineer and fireman jumping to save themselves. The wreck was cleared about noon, passengers in the meantime, running around by Milton.”

The following photos illustrate the text of the article, particularly the images of the sight seers and “smashed into kindling” one of the freight cars. 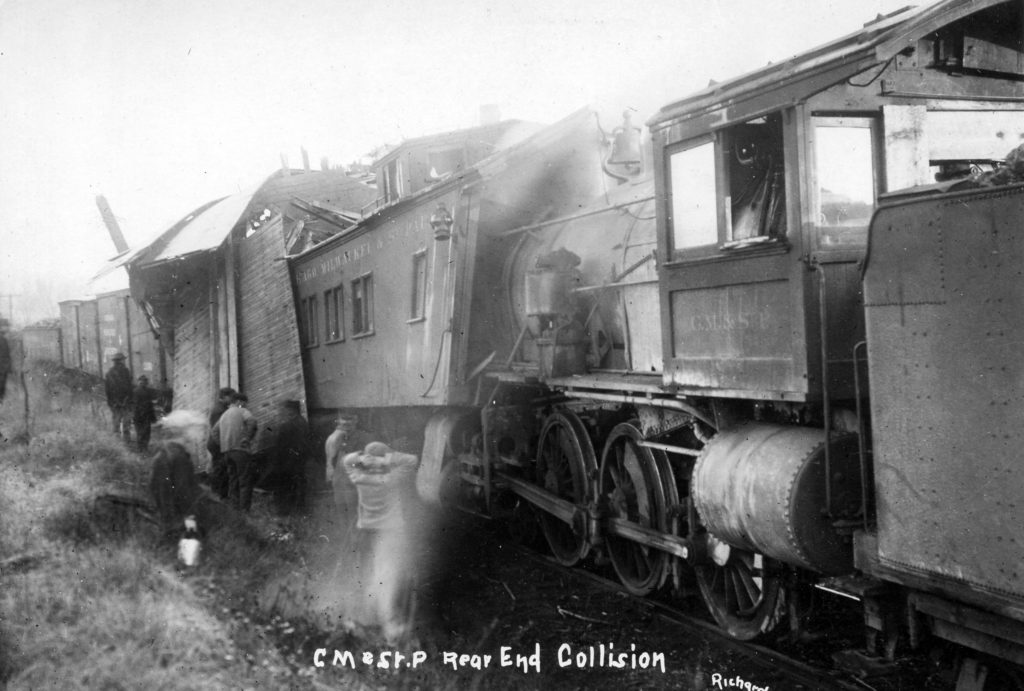 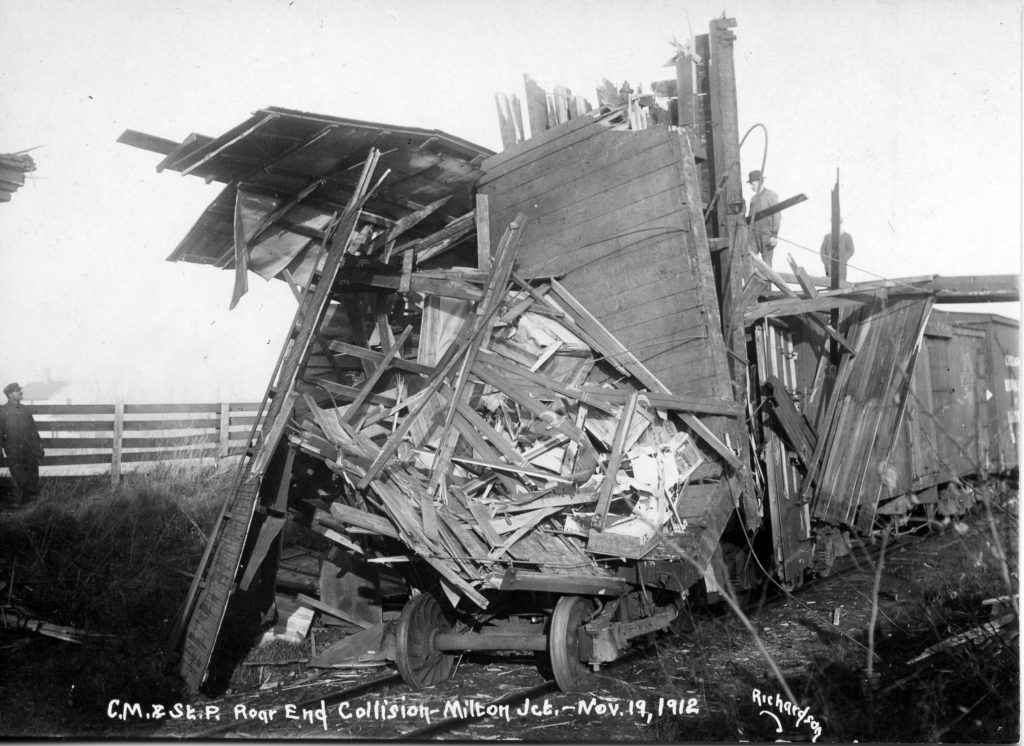 Not all of the train wreck photos in the museum archives are identified and simply exist as mere photos without any information. Nonetheless, the images are striking as evidenced by the following photos of a winter derailment. 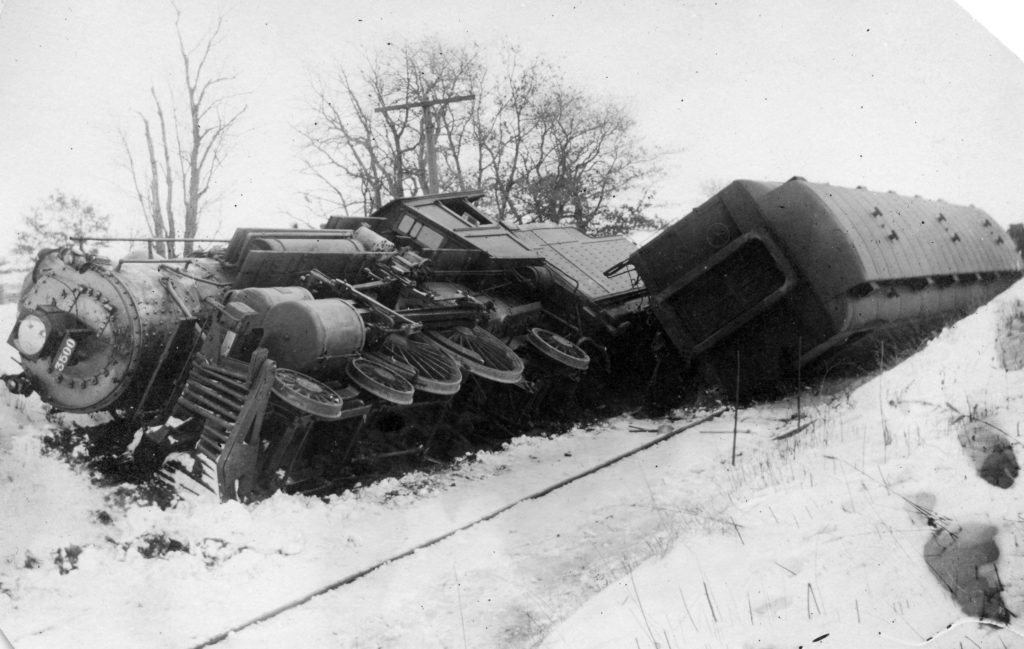 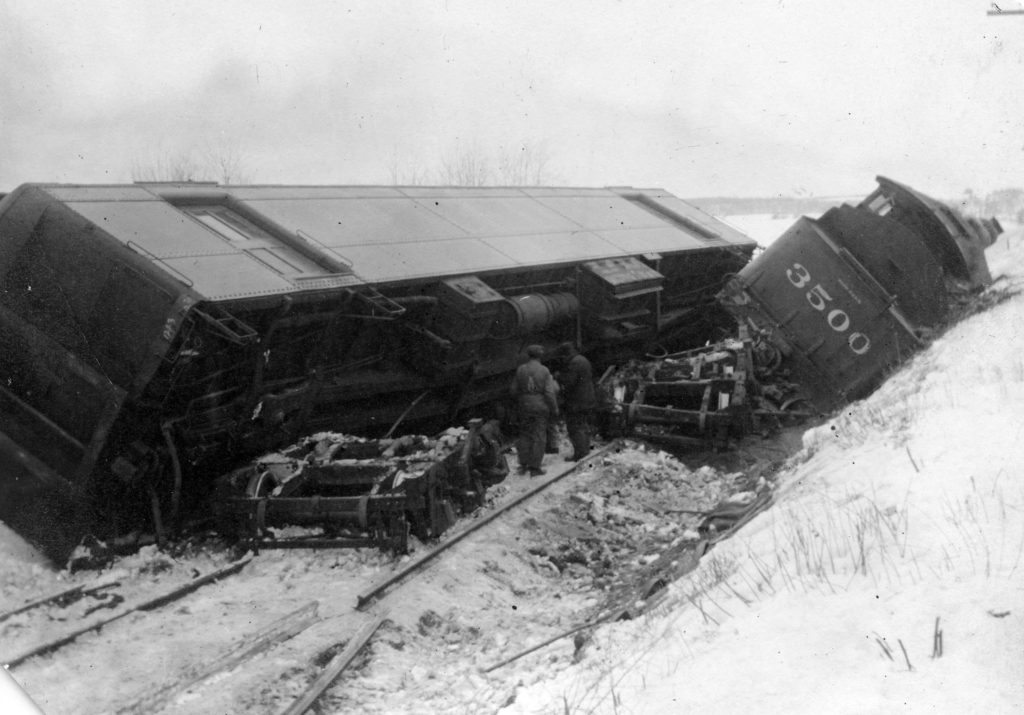 The railroads were not immune to natural disasters. On September 8, 1913 the Milton rail depot burned to the ground from a fire started by a lightning strike. It’s unclear when this version of the depot was constructed – perhaps in the 1870s or ‘80s. It was located on the south side of the main rail with a spur wrapping around the south side of the building. After the building burned, the new depot stood on the north side of the main tracks, adjacent to what is now North Goodrich Park. 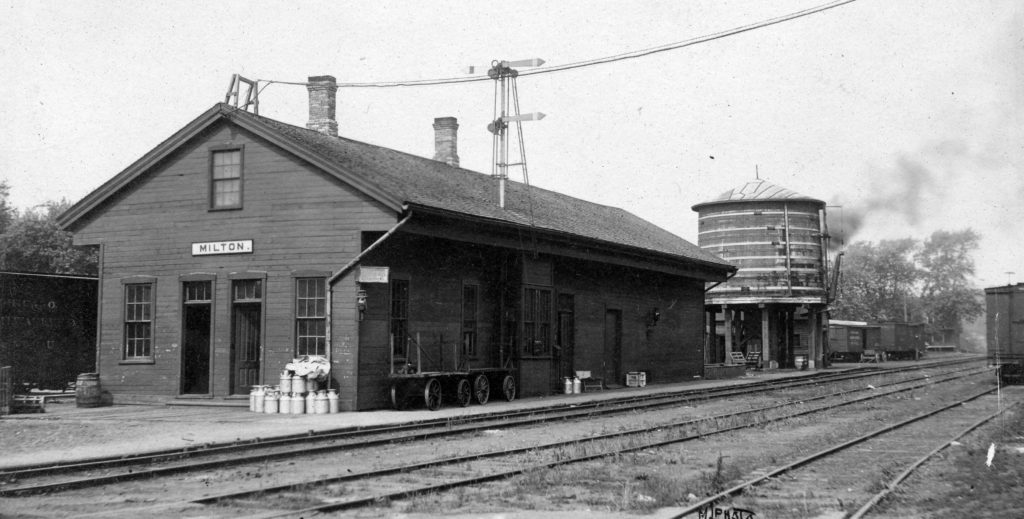 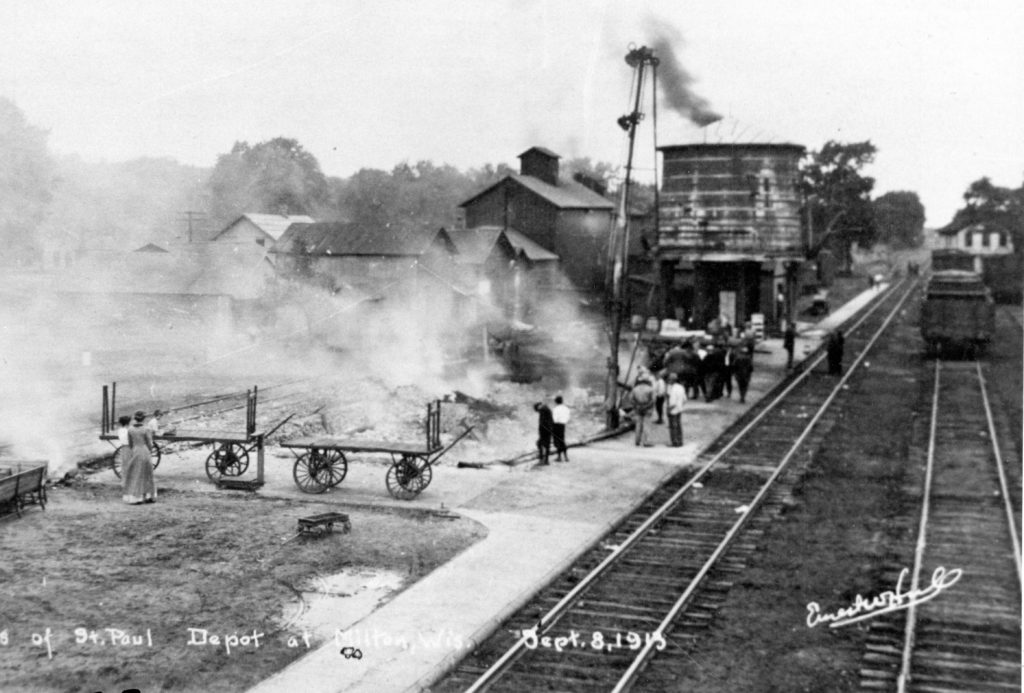 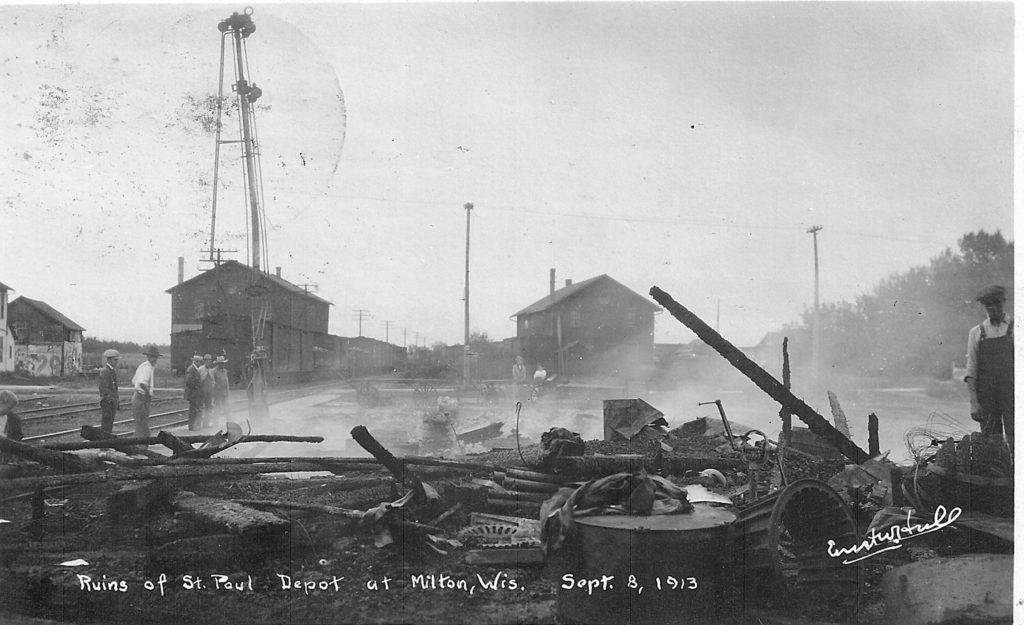 While the new depot facility was being constructed, a temporary depot office was set up in the Shemmel Hotel, which sat just south of the blacksmith shop on the Milton House campus, land that currently locates the museum parking lot.

In his diary, Ezra Goodrich summed up the fire this way:

“Lightning struck the depot in Milton and it burned last night. It has been patched up and made-over since year one. The old depot site looks naked enough. Don’t hear anyone say they were sorry to see it burn.”

The rebuilt depot was active into the early 1950s. It was abandoned by the rail company in the late 1950s and donated to Milton College, which deeded the property to the village. The building still stands as the City of Milton Community House. 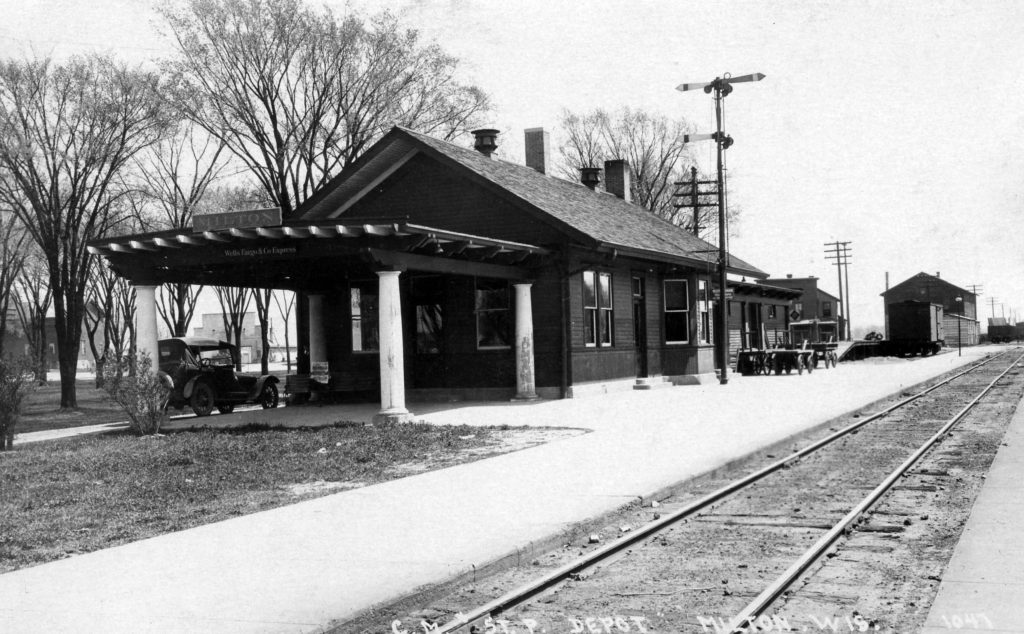 6 thoughts on “Milton Train Wrecks: When the Iron Left the Rail”