The area that became the Village of Milton Junction saw its first settlers shortly after Joseph Goodrich, Henry Beebe Crandall and James Pierce came to the du Lac Prairie in 1838. Goodrich staked land, platted a square and constructed the Milton House by 1845.

Crandall claimed land a mile west of Goodrich’s parcel and constructed a double-log home that stood until the early 1850s before being replaced by a wood frame home at what is now 160 W. Madison Ave, a property perhaps best-known more recently as the home of Milton College English professor and historian Rachel Salisbury. In 1840, Crandall erected an 18-foot square addition onto the original log home for the community’s first school.

Reynolds Greenman was widely regarded as having established the first business along Merchants Row. Greenman was 11-years- old when he came with his family to Milton in 1850 and was educated at Milton Academy. He was married to Lois Collins in 1862 and built one of the first homes in West Milton, the area that would become the Village of Milton Junction. A year later he established a lumber yard which he operated for more than 40 years. His office was on the north end of Merchant’s Row and was the first business on that street. He later built and occupied the home at the intersection of Merchant’s Row and Madison Avenue that through much of the 20th Century served as the offices for Hull and Wright Insurance. Greenman served the office of Justice of the Peace and was elected to the school and village boards and chaired the Rock County Board of Supervisors. He died in 1912 at age 72.

Growth didn’t truly begin to spurt in the fledgling area a mile west of Joseph Goodrich’s Milton House until the Chicago, St. Paul and Fond du Lac rail came through in 1858. This north-south line created a busy junction with the east-west St. Paul line that came out of Milwaukee six years prior. When the rail line was built, several families, mostly of Irish decent, came to work on the rail and settled here. In 1858, G.W. Matthews erected a building at the junction of the two rail lines and used it as a hotel and depot.

Demand grew in the little town then known then as West Milton for more hotel rooms and in 1861 William Morgan obliged by building the large Morgan House at the site of Matthews’ building. Morgan came to Old Milton in 1842 and engaged in the shoe business. In 1862, brothers Wiiliam T. and Isaac P. Morgan purchased 36 acres that would become Milton Junction from Silas Crandall, son of Henry Beebe Crandall. The Morgan House became the hub of rail traffic and the community, serving as a hotel with banquet hall and train depot. On Christmas Eve, 1872, the Morgan House burned in a fire at a loss of $20,000. The following spring, Morgan rebuilt a larger hotel on the same location and, five years later, sold it to his son-in-law, John C. Stetson.

Isaac Morgan, William’s brother, helped in the business development of Merchant’s Row, engaging in the hardware business. In 1866 he built what became one of the street’s most recognizable buildings, later known as the P of H Hall. His son, William H. Morgan was a Civil War veteran, wounded in the battle of Gainsville before seeing battles at Fredricksburg and Gettysburg. He farmed north of Milton and was vice president of the State Bank, the forerunner to the Farmers Bank and First Community Bank. Isaac Morgan’s daughter was Charlotte Morgan who married William Little and then as a widow, Ezra Goodrich.

Many other early settlers in the area that became Milton Junction influenced the community’s growth. Stephen Butts first came from Pennsylvania to Rock County in 1836 and located a claim on land now situated west of Milton along County Highway M. He returned to the area in 1838 and is accredited with having turned the first furrow of land in Milton Township. Alexander Paul came to Rock County in 1844 and farmed in the Town of Fulton. A few years later he purchased land closer to the rail junction and in 1860 built the large brick home that still stands along Madison Avenue two blocks west of Milton West Elementary School. He founded the State Bank which became the Farmers Bank and now First Community Bank. His son, John Alexander Paul was president of the Farmers Bank for many years. His other son, Alexander McLaughlin Paul, succeeded brother John as bank president in 1936 after serving terms in the State Assembly and State Senate. 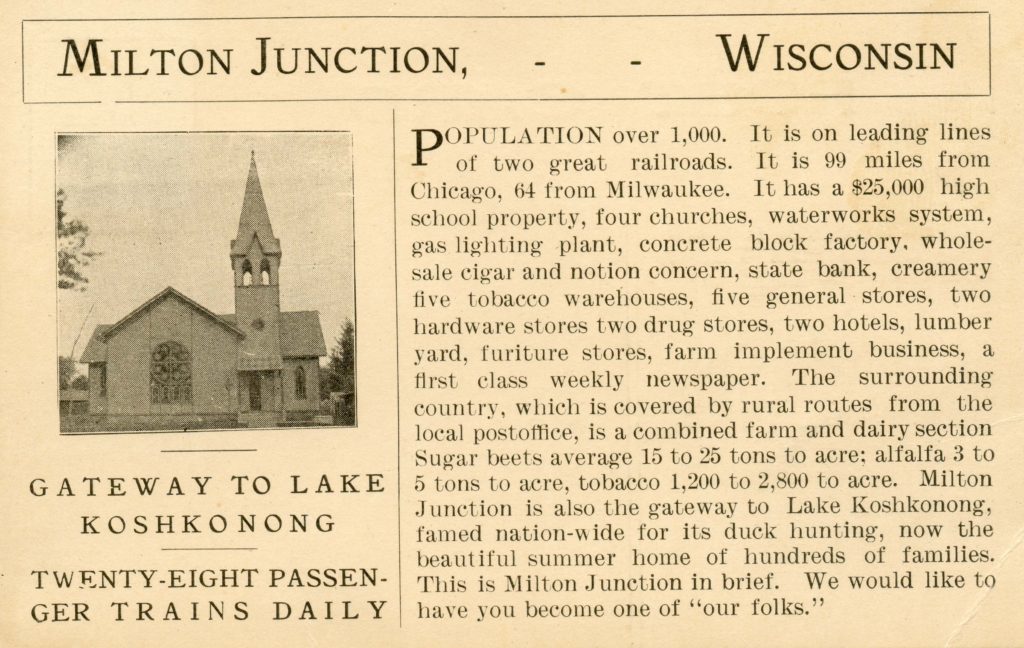 Train traffic increased from the time the north-south line of the Chicago, St. Paul and Fond du Lac rail was laid in 1858 through the early 1900s, bringing more than 30 passenger trains daily through the Junction. Trains often laid over at the Morgan House Hotel and Depot and passengers dined in the building’s spacious dining room. The Morgan House, with a train approaching from the north, is pictured here. 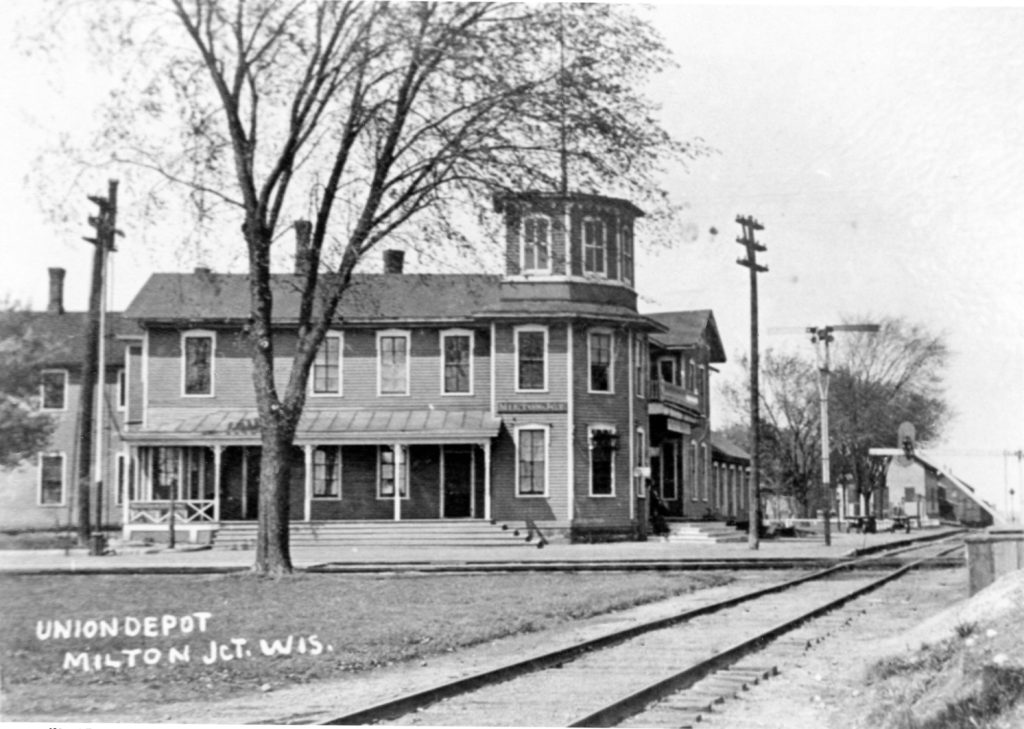 As rail traffic increased, the Junction’s busy downtown began to grow and flourish along Merchant’s Row, as evidenced by these photos dating back to 1879. The landmark building of the downtown was the Patrons of Husbandry Hall, a large, three-story wooden building that would house a variety of businesses until being razed in 1976. Constructed in 1866 by Isaac Morgan, records show he operated a hardware store there through the 1870s. In the 1880s the building was sold to the Patrons of Husbandry, a national agricultural fraternal organization that later became known as The Grange. That agricultural influence was prevalent through the early years of the village when Grange auctions were held monthly outside the hall, which was located across the street from the busy lumber yard. The photo below shows one of those auctions from the early 1920s. 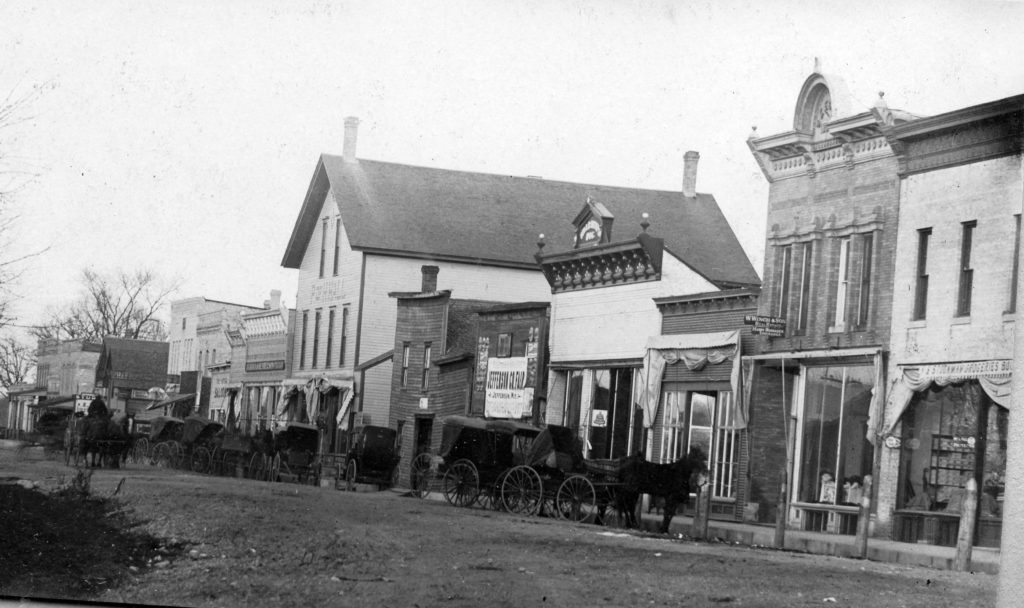 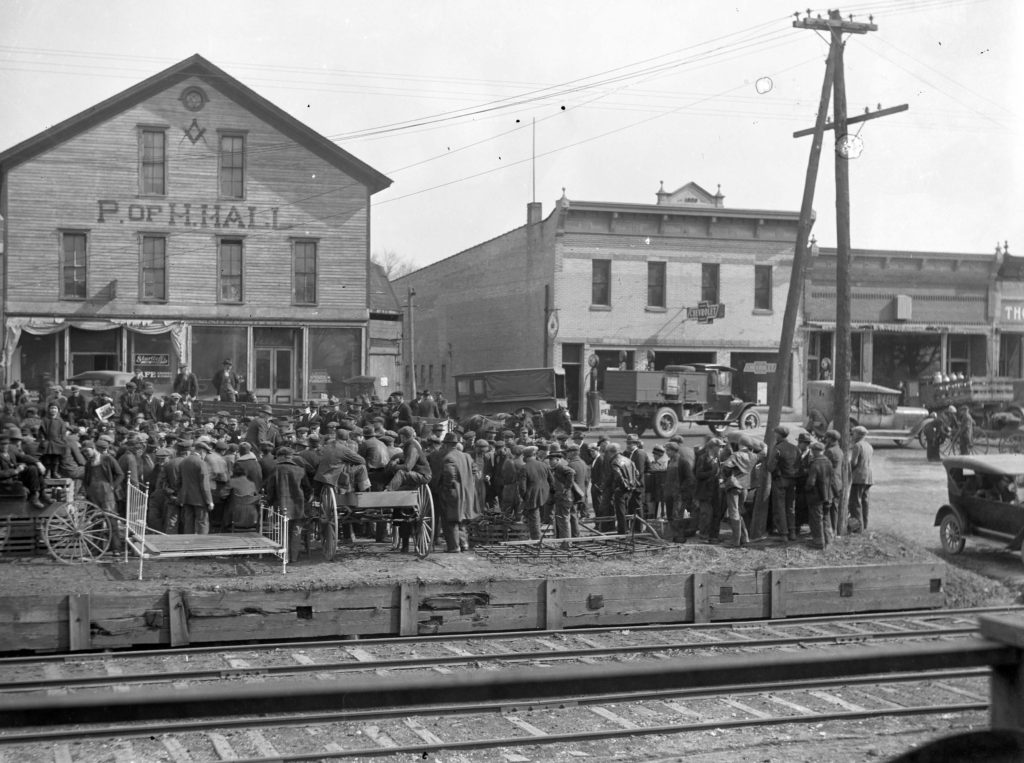 The north end of Merchants Row was anchored by the brick building constructed in the early 1900s by Freeborn Hull for his implement dealership. Freeborn Hull was the grandson of Varnum Hull, one of the first pastors of Milton’s Seventh Day Baptists Church during the 1850s. Freeborn’s father, Calvin Hull operated a hardware store for many years along Merchant’s Row. The brick building with large windows is evident in the below photo. In later years the building was converted to an automobile dealership and served Harte Chevrolet and, later, Dickoff Chevrolet. 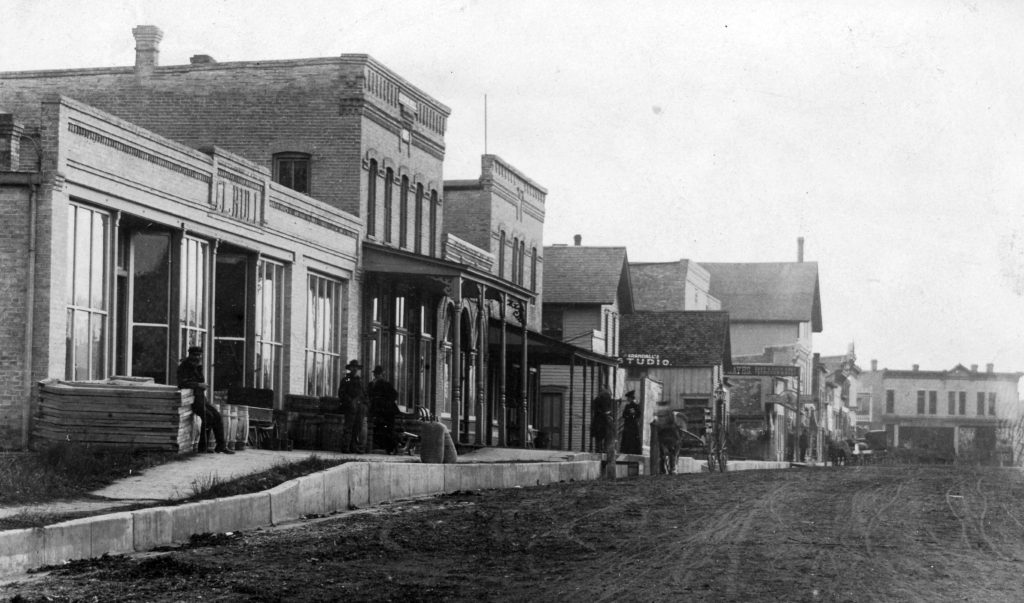 Merchant’s Row became a popular site for parades, celebrations and other gatherings. This photo shows the September day in 1910 when former president Teddy Roosevelt briefly stopped and addressed a crowd that was reported to be about 2,000 people. The next two photos show the 1911 Homecoming parade and the 1917 Harvest Festival. The 1917 Harvest Festival photo was snapped from the apex of a Ferris wheel facing south. 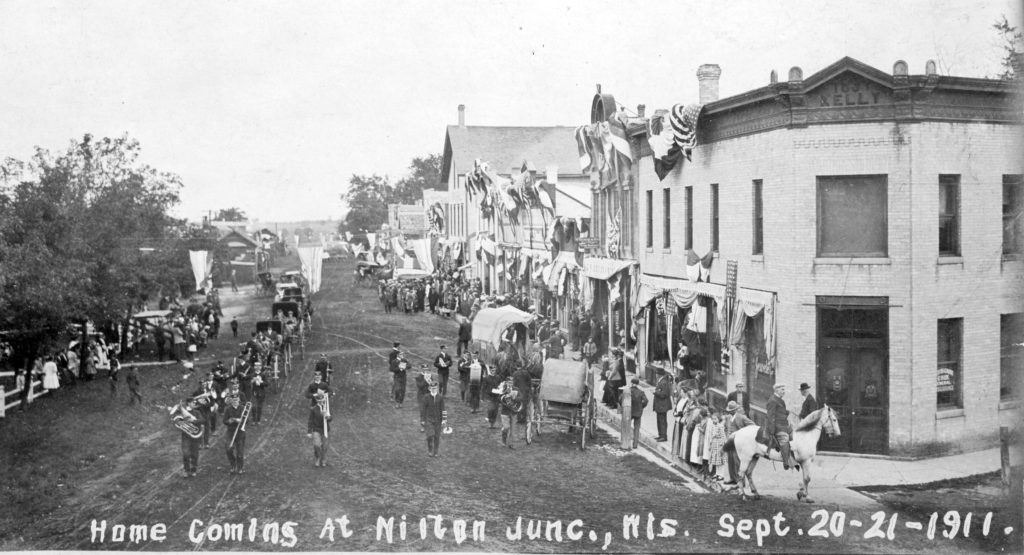 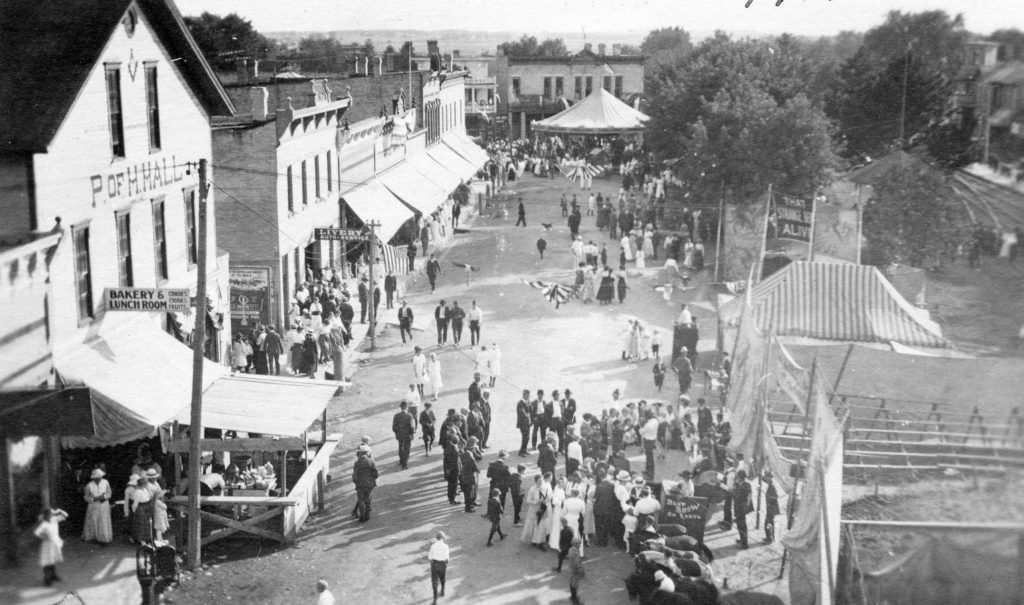 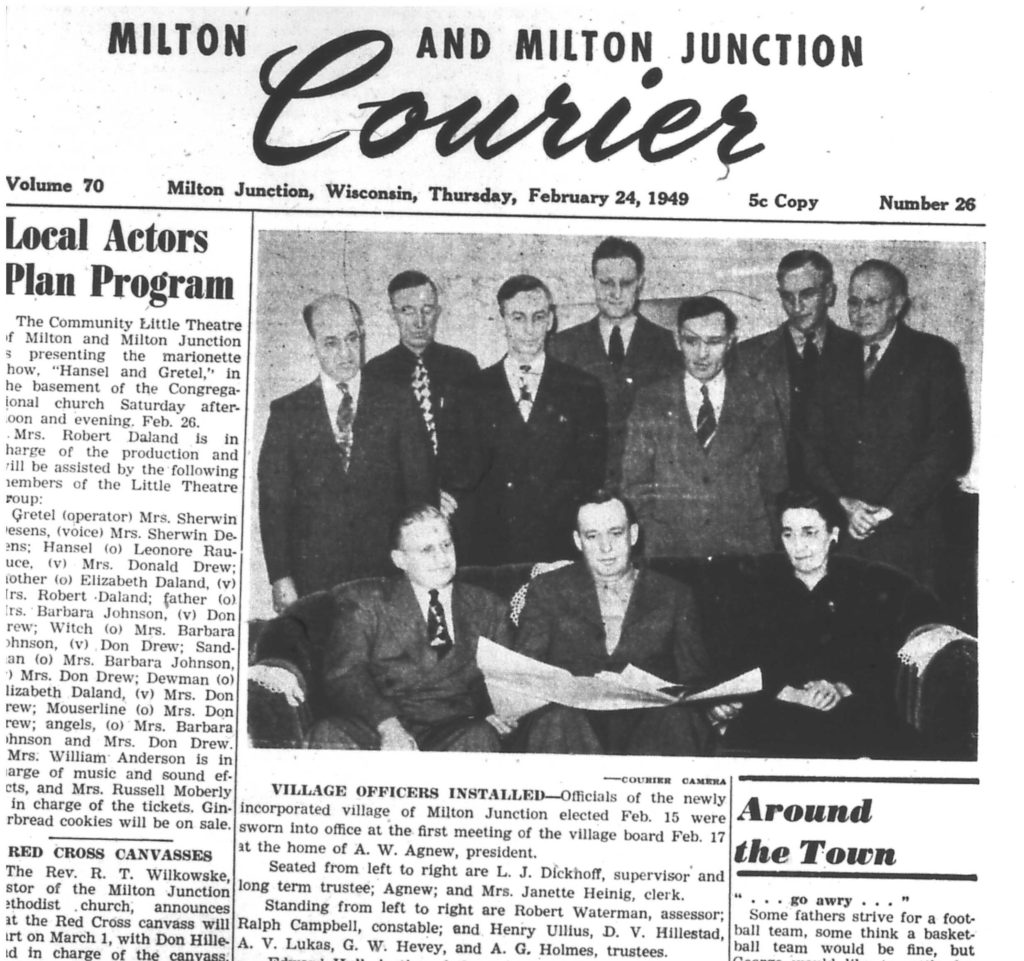 Heavy snow on January 18 could not keep away from the polls 516 of the estimated 630 eligible voters. The percentage of voters was remarkably higher than any other recent election at the Grange Hall, officials said. With the vote, Milton Junction legally became an incorporated village of about 1,007 persons.

With the incorporation of the village, the township of Milton lost jurisdiction over the village and the area had to wait until after the selection of officers before government could function.

Milton Junction became the fifth village in Rock County to assume incorporated status. Other villages in the county in 1949 were Milton, Clinton, Orfordville and Footville. One member was added to the Rock County Board of Supervisors, growing the number of representatives to sixty three.

But the issue of incorporation was far from over. Legal battles followed when opponents of incorporation challenged the matter in court, seeking to nullify incorporation on grounds that pre-election petitions objecting to the referendum were incorrectly dismissed. Petitioner Arthur Tegt took the matter to the Wisconsin Supreme Court, which in October, 1949 declared village incorporation legal.

Legal battles also continued over the division of assets between the new village and Milton Township. It wasn’t until 1953 that the Wisconsin Supreme Court again settled the local matter by ordering the township to divide the assets, including a large building fund, with the village.

Many improvements to the village were made over the next few years, including the blacktopping and lighting of streets, garbage collection and updated building and zoning ordinances.

The village annexed LaMar subdivision in 1955 and in 1958 the Arnie Agnew and Lawrence Dickoff donated LaMar Park to the village. The name LaMar is derived from a combination of the names of family members.

Merchant’s Row became a thriving, busy downtown through the middle portion of the 20th Century, even after rail traffic diminished. Passenger rail service through Milton Junction gradually ended by the late 1940s and the north-south rail line was abandoned in the early 1960s. Nonetheless, stores, shops, cafes, mills and the lumber yard all did brisk business at a time when one could purchase a good portion of life’s necessities without having to leave the village. 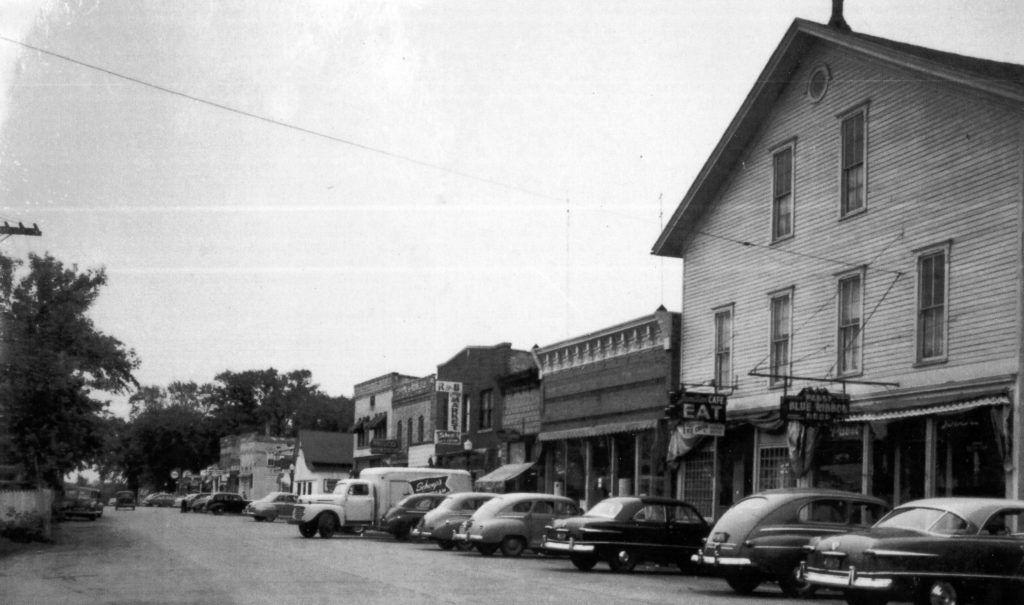 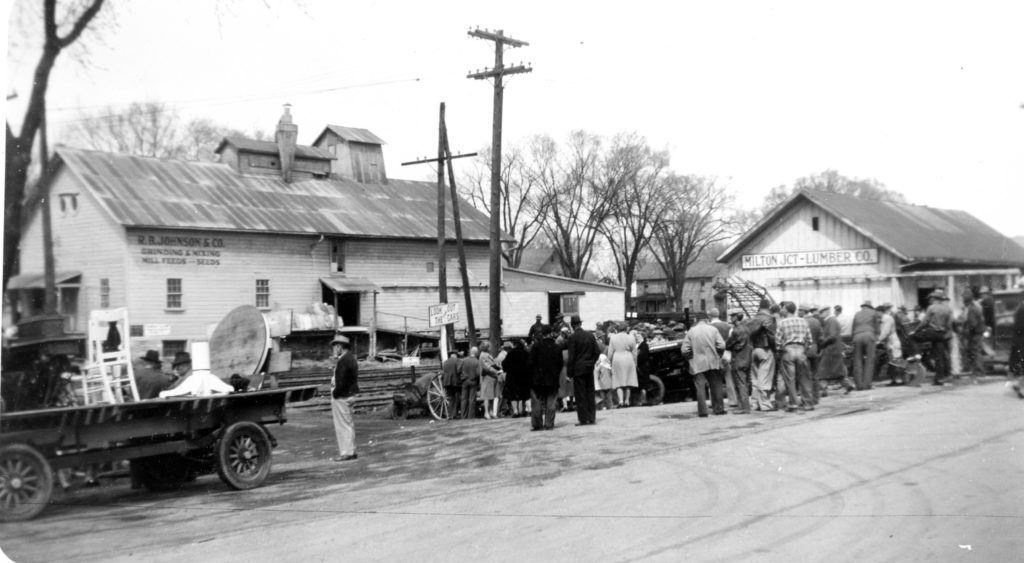 At any given time during the mid-1900s Merchant’s Row was the home for two grocery stores, two hardware stores, men’s and women’s clothing stores, a variety store, two feed mills, lumber yard, newspaper office, automobile dealership, multiple barbershops and hair salons, restaurants and taverns and a handful of gas stations. 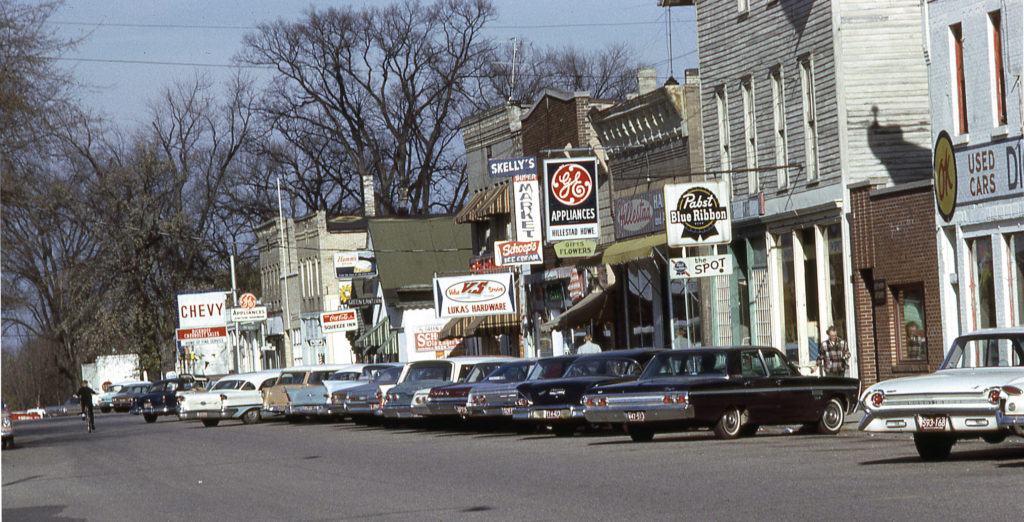 15 thoughts on “Milton Junction history in words and pictures”