Skip to content
January 11, 2019 Doug Welch 4d Comments
‘
Two generations of the Borden family left a large and lasting imprint on the development of the early Milton community, producing one of the town’s first physicians as well as one of the most distinguished graduates of Milton College.

Dr. William Borden came to Milton from New York in 1854. His nearly 50 years of doctoring in the community was interrupted only by a stint as a surgeon in the Union Army near the end of the Civil War. During those late decades of the 1800s, Dr. Borden was a respected and guiding force in local education and the transition of a town into a village.

His son, James, was an 1890 graduate of Milton College. Following a four-year stint as the second principal at Milton Junction High School, James Borden was superintendent of schools in Marshfield before leaving for Madison as the state’s Assistant Superintendent of Public Instruction. Beginning in 1920, the younger Borden served as state budget director under six gubernatorial administrations. So revered and respected was James Borden that at the time of his death in 1939, the sitting Governor and three of his predecessors served as honorary pall bearers at his funeral and memorial services.

William Borden was born in 1824 in Sharon, New York, the son of a tanner by trade and eldest of seven children. His grandfather fought in the Revolution. He attended Freedonia Academy in New York and received his medical training at the University of Buffalo, graduating in 1849. Dr. Borden practiced medicine for a few years in Scio, New York before deciding to head west. He married Lovina Van Campen in 1851 and three years later, the couple and 3-year-old daughter, Mary Alice, settled in the fledgling community of Milton. According to a story relayed in the 1942 obituary of Mary Alice, her father started for Minnesota in 1852, seeking a place to relocate. En route by train from Milwaukee while stopping overnight in Milton, which at the time was the end of the railroad run, Dr. Borden gave aid to a farm family. He liked the country so well that Dr. Borden decided to stay and in 1854 brought his family to Milton.’

Why Dr. Borden initially set out for Minnesota is unknown. It can be noted that Lovina Borden’s brother, Benjamin Van Campen, settled his family in Goodhue, Minnesota.

Dr. Borden was one of the first physicians to practice in Milton, serving the community in that capacity until his death in 1905. In 1864 Dr. Borden was appointed by Wisconsin Governor John T. Lewis, Surgeon of the First Wisconsin Battery, Heavy Artillery, with the rank of Major. He served in that capacity through the end of the Civil War in April, 1865. He was surgeon in charge of US Post Hospital at Fort Lyons, Virginia. It was from Fort Lyons that on April 10, 1865 Dr. Borden jubilantly wrote home to Lovina to share his joy in the news that the war ended the prior day with the surrender of Robert E. Lee’s Confederate Army at Appomattox Court House. Dr. Borden’s hand-written letter is on display at the Milton House Museum. It reads in part:

“The past week has been one of great events,” Dr. Borden wrote. “But the greatest is the surrender of Lee, as that is the end of the war. No more fighting; no more calls for troops; soon the tide of men will set the other way and instead of southward it will be northward. I suppose you have the news as soon as me and perhaps before. We did not get it until this morning at 9 o’clock.”

“Everyone is jubilant and ready to sing poems of praise,” the letter continues. “Everyone is ready to forgive everybody and everything. No one feels like doing anything. Cannot set themselves at work but ready to shout glory, praise to God. Events go rapidly. The mind can hardly keep pace with them.

“It is too grand to be taken at on a glance. We are dumb with amazement and awe.”

Dr. Borden returned to Milton that spring and restarted his medical practice. He served the community in that capacity until his death in 1905 at age 81. In 1856 he joined the Wisconsin State Medical Society and was the oldest living member of the society at the time of his death. He was a member of the American Medical Association and held a number of public positions.

Dr. Borden’s office and family residence still stands at 117 Parkview Drive. It was a single-family home built around 1860, purchased by Dr. Borden in 1872 and remodeled for the dual purpose. It was described as one of the most attractive and inviting homes in the community. Newspaper accounts from the early 1880s indicate Mrs. Borden opened the home to serve meals to rail travelers passing through the nearby depot.

According to Dr. Borden’s profile in the Commemorative Biographical Record of Rock County, compiled in 1901, “His long residence at Milton has been one of wide usefulness and eminent success, broken only by his service in the army during the Civil War.

“Dr. Borden is a much respected authority in Milton, not only professionally, but in matters of general welfare,” the biography continued. “His long residence in the thriving little city has made him a living factor in its growth from its infancy, and elements for well-being, to which for nearly a half century he has contributed so generously, will remain and widen their influence long after his active life work has drawn to a close.”

The Borden’s eldest daughter, Mary Alice, lived in the Borden home until her death in 1942 at age 91. She never married and was active in the affairs of the Congregational Church. On her 80th birthday in 1931, the church gave a banquet in her honor. Mary Alice was also actively involved in many local civic organizations, including the Women’s Village Improvement Club and the King’s Daughters.


Less is known of Emily Borden, born in 1857 in New York. She married George Van Campen (no immediate-family relation to her mother Lovina Van Campen Borden.) The couple lived in New York and had a son born there in 1879.

The youngest Borden child, James, was born in Milton in 1869. He was an 1890 graduate of Milton College and of the University of Wisconsin. He was the second principal at Milton Junction High School from 1892 to 1896. Borden was also high school principal and superintendent of schools in Marshfield before moving to Madison to serve as assistant state superintendent of public instruction from 1905 to 1917. He also served as an Assistant Dean at the University of Wisconsin.


In 1920 Borden became Wisconsin’s state budget director, a position he held under six governors and through the time of his death in 1939. Borden, in fact, had been working long hours on the budget when he collapsed late at night in the capitol. He died at Wisconsin General Hospital at age 69.

“His varied service to the state was of the highest quality, always characterized by the deepest devotion and loyalty to the supreme interests of the commonwealth,” the resolution reads. “To James B. Borden it mattered not who sat in the seat of power or command, he saw clearly his obligation and responsibility and with his high sense of duty he followed both unswervingly. . .

“He knew no partisan loyalty – only loyalty to the supreme interests of the state and its people.”

“In his life there was a great influence and a great school besides Milton College and the University of Wisconsin,” Fitzgerald said of James Borden. “The great influence was his father, and the great school was the life of the country family doctor. It was a great school to be trained in. He often went with his father on his rounds, day and night. He got the human touch. He learned the tragedies and joys of human life in their varied forms among the simple and genuine people of the countryside who were just folks. He learned from his father the lessons of the consecration of a man’s life to his fellowmen, of the readiness to help a fellow being with his skill if there was need, of the sympathetic understanding of the tragedy and pathos of suffering humanity, and of willingness to sacrifice oneself to alleviate it. This experience of his father sank into his young soul. And there was always in Borden a kindly feeling for his neighbor, an almost Spartan conception of life, and a near sense of its tragedy and high sense of its duty.”

In 1895, James Borden married Mary Alice Tomkins, a native of Milton and Milton College graduate. She died in 1942. They had one son, William Henry Borden, born around 1896. 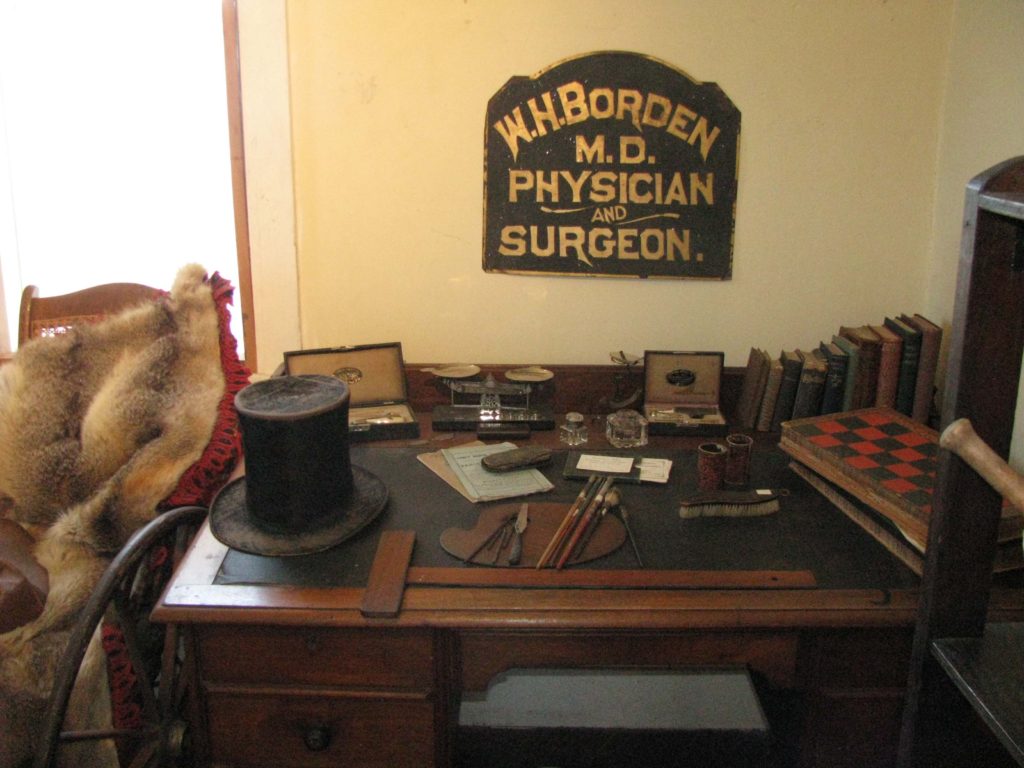 In 2016 the great, great grandson of Dr. William Borden, William H. Borden, and his son, James, visited the Milton House to view their family’s artifacts displayed at the museum. The Borden decedents reside in Raleigh, North Carolina.