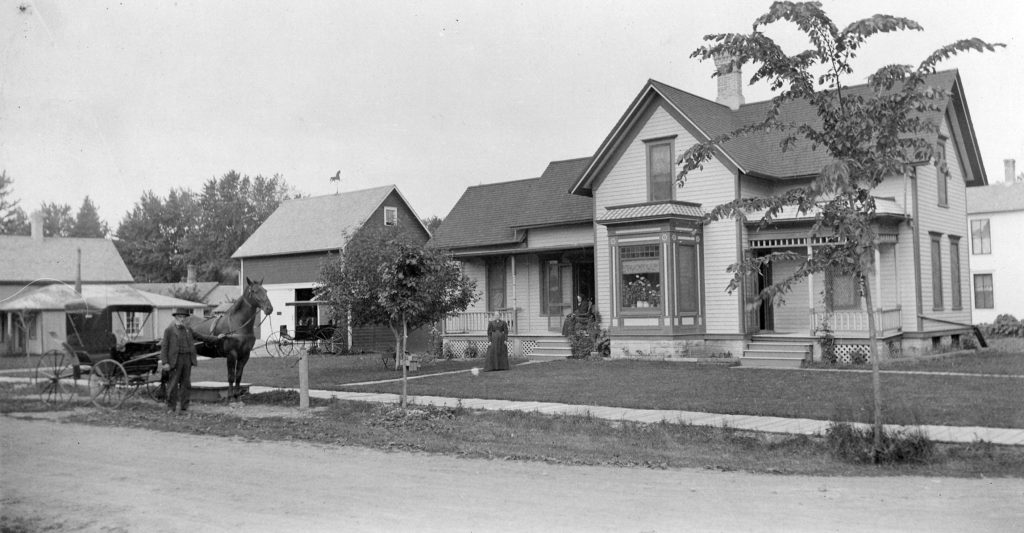 If it’s true a picture is worth a thousand words, this photo is worthy of a small book dedicated to the history of Milton and Milton Junction.

The principal characters of this 1890s photo are directly related to the people credited with founding each of those villages. Those villages merged into the singular municipality of Milton in 1967. The photo was taken outside of a home that still stands at the intersection of Second Street and Crandall Street in what then was Milton Junction.

The man standing with the horse and buggy is Ezra Goodrich, the son of Joseph Goodrich who founded Milton, Milton Academy (College) and Milton’s Seventh Day Baptist Church. Ezra’s first wife was Elizabeth Ensign, who passed in 1892, leaving Ezra a widower. In 1893, Ezra Goodrich married Charlotte Morgan Little, pictured standing in the yard.

A short time after they married, Ezra and Charlotte moved from the brick home he built in 1867 and still stands at the intersection of Madison Avenue and South Janesville Street, kitty corner from the Milton House. The couple moved to the pictured home along Second Street, located across Crandall Street from the John Owens home.

Charlotte was the daughter of Isaac Morgan, who, along with his brother William T., are credited with founding Milton Junction.

Ezra Goodrich, always extremely self-aware and a student and author of the community’s young history, publically stated that the union of his marriage to the daughter of one of the founders of Milton Junction will help to unite the villages of Milton and Milton Junction.

How’d that work out?

The villages maintained their differences for another 70-plus years, finally merging in 1967.

Isaac Morgan, along with his brother, William T., in the late 1850s, purchased a large track of land from Silas Crandall, son of Henry Beebe Crandall, who came with Joseph Goodrich to the Du Lac Prairie in 1838. It was on that track of land where in 1858 the north-south Chicago, St. Paul and Fond du Lac rail came through to the area, creating a junction with the existing east-west Milwaukee, Mississippi line. Soon, the fledgling community previously referred to as West Milton, became known as Milton Junction.

In 1858, the large Morgan House hotel and depot was constructed at the rail junction and business buildings began popping up along Merchant’s Row. The most substantial and longest-lasting of these wood framed buildings was constructed by Isaac Morgan in 1866. Later in its life the three-story structure was known as the P of H Hall and was home to the Spot Tavern and storage for Hillestad Ace Hardware when it was razed in 1976.

Charlotte Morgan was born in New Hampshire in 1833 and in 1851 married William Little in Vermont. Little was farming in Fall River at the outbreak of the Civil War. He enlisted in the union Army through the end of the war and then came to the Milton area to farm until 1877, moving to Minnesota. He died there in 1886, leaving Charlotte a widow and she moved to Milton Junction where her parents were living.

The Little’s daughter was Lucy Little, blind from birth and who lived much of her life with her grandparents. Despite being blind, Lucy was known for her literary skills, composing poems, Hymns and letters transcribed by her grandmother, Rebecca Morgan. Lucy is perhaps best-known locally for having received a reply from Mary Todd Lincoln after writing her a letter offering condolences upon the death of Abraham Lincoln.

The woman pictured in the chair on the porch is Charlotte’s mother, Rebecca Glading Morgan. Born in 1810 in Salem, Massachusetts, her father, William Glading was a United States Naval Officer during the War of 1812. He died as a prisoner of war during that struggle. 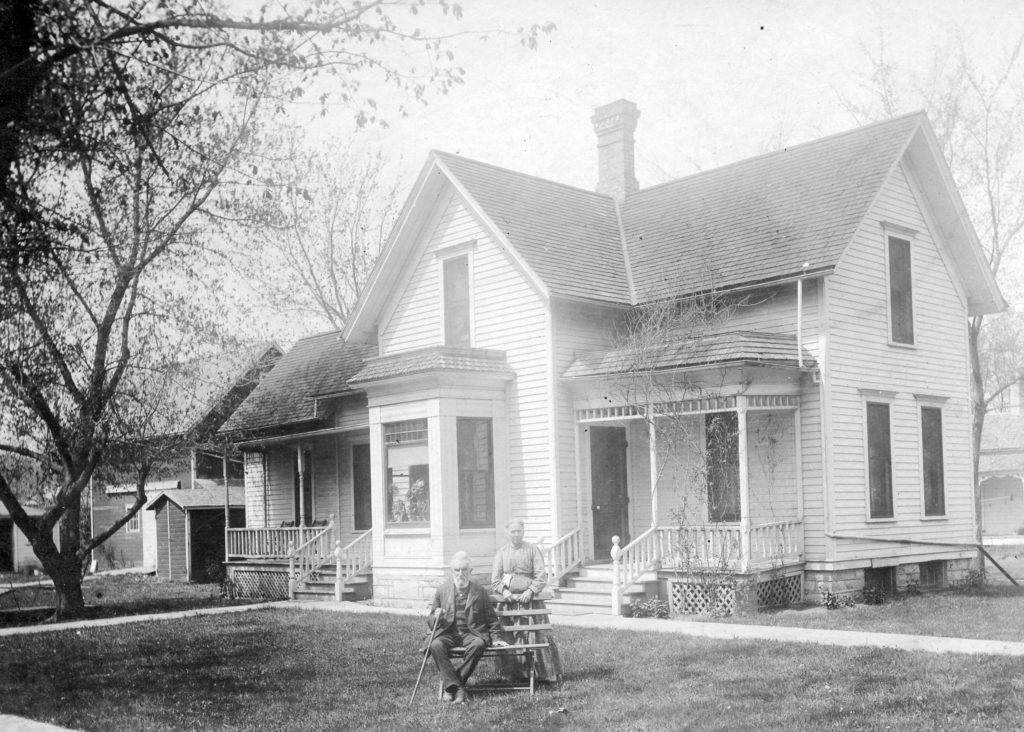 3 thoughts on “Ezra in the Junction”