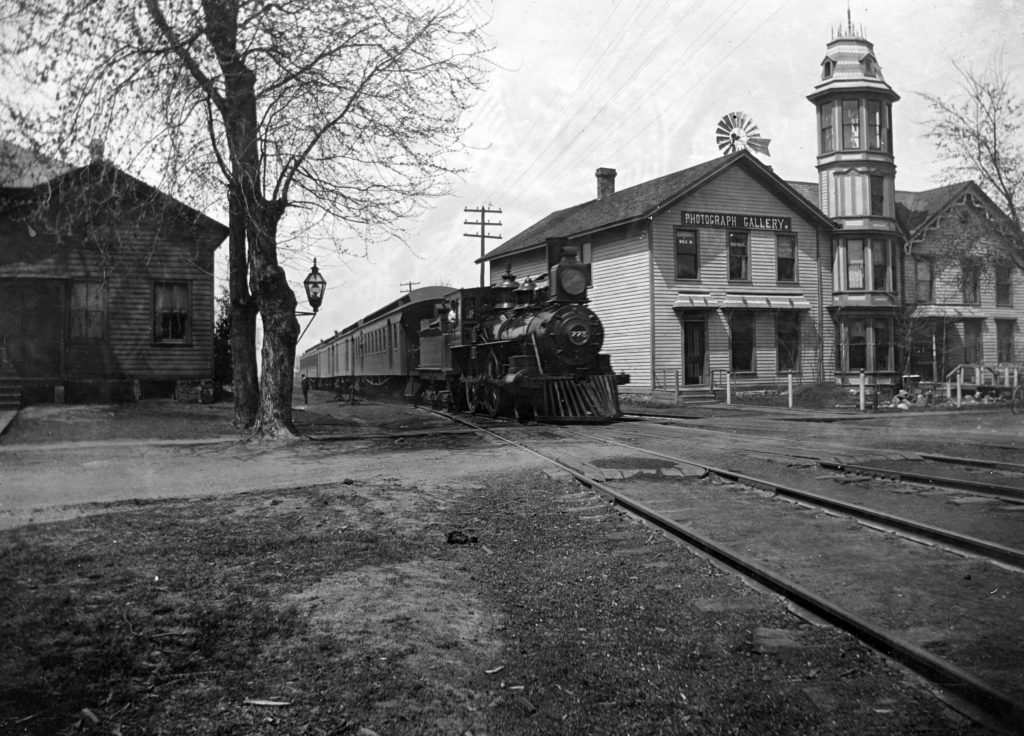 Ellery Burdick’s imaginative toil was rooted in one of the most distinctive buildings of the Milton village during a time he utilized the new technology of photography to document and preserve many of the early images of the fledgling community and its families.

Through the final decades of the nineteenth century, the Ellery Burdick Photograph Gallery was a landmark structure in a young village that already boasted such dynamic buildings as the Milton House, Main and Goodrich halls of Milton College and Milton Junction’s Morgan House and P. of H. Hall.

From this building Burdick took many of the portraits of area families – photos that survive today in the scrapbooks and albums of people throughout Milton and Rock County. It was from the unique glass tower of this building that Burdick produced the many elevated panoramic views of the Milton House complex – images that continue to line the walls of the museum as well as pages of history books and promotional brochures. His work was the subject of a term paper written in 1978 by Steve Schwengles, a student at Beloit College, for a class on the History of Photography.

In short, the images captured by Ellery Burdick, perhaps dating as far back as the 1850s, have endured as a key component in documenting the history of Milton. It’s a shame the same cannot be said for the unique building in which Burdick worked. Located at what is now the intersection of Parkview Drive and Madison Avenue, the building was constructed at the site of the original Milton Academy building erected by Joseph Goodrich in 1844 and had collapsed by about 1856. The gallery’s double-peak building in later years sported a tall, glass tower that gave a very distinctive look to the structure. Early photos show the building without the tower, which may have been added sometime after 1881.

Burdick died in 1919 at age 87 and the building began to descend into despair. Shumway Appliance got its start in the south end of the building in the mid-1920s before moving south a couple of blocks to the intersection of then-Main Street and Greenman Street. The gallery building was razed sometime during the 1940s. In 1956 the village post office was erected on the lot and that building currently houses a real estate office. Milton Laundry shares the lot.

Burdick was born in Alfred, New York in 1832, the second son of George Stillman Burdick and Diana Macomber. In 1839, Goodrich brought his family west from Alfred, New York to the Du Lac Prairie. The Burdick family followed in 1842, settling a farm in Lima township. Census records list Burdick as a cabinet maker during early adulthood.

Burdick was 23 years old in 1856 when he married Phebe Irene Babcock. That same year, records list a “Daguerreian gallery” in Milton. An early photo process, Daguerreotypes eventually gave way to the wet plate process. If this was Burdick’s early gallery, it means he was photographing professionally prior to the Civil War.

The earliest-known images of the village are of the first rail depot and academy building. Each of the images is of poor quality. A third photo and higher-quality image is a cross-village view taken from the hill that would later sport Main Hall. The latter is the only known image of the Milton House hexagon as a two-story structure. The third floor of the hexagon was not added by Joseph Goodrich until 1867.Visible in the photo are the early rail depot, constructed in 1852, and the academy building, which collapsed by about 1856. Those elements are key to dating the photo from a very specific four-year timeframe.

There can be no doubt, however, that many of the photos documenting the growth of the village through the late 1800s came from the Burdick Photograph Gallery.

“Ellery found the life of the village right outside his gallery,” Schwengles notes in his Beloit College dissertation about Burdick. “The park was the center of the village and by photographing it Ellery documented the soul of the village.”

Included here are just a few of the existing photos that back up the claim of Schwengles.

Photos of note are the snow scenes, taken on a sun splashed winter day in 1881.The Milton Historical Society has the glass negatives of these images among its archives. One photo shows Ezra Goodrich taking a break from shoveling the snow in his walkway. Schwengles described the image in this manner:

“Posed in front of his home, located on the north east end of the park, Ezra is the darkest figure in the picture. He catches your eye immediately. . . Taken in 1881, the photograph shows a bad winter with the snow piled up as high as Ezra. The newly-fallen snow has Ezra out shoveling his brick walk with an old farmer’s shovel. Like all rich men of that period Ezra wears his suit and hat, even to shovel snow.”

From what we know of Ezra, he would no doubt bristle at the notion of being considered “rich.”

It’s quite possible the photo of two women in front of the Burdick Gallery was taken on the same day as was the Ezra Goodrich photo. The woman on the left is Phebe Burdick, Ellery’s wife. The woman on the right is perhaps Miss R. E. Davis, the daughter of a local farmer who studied photography for a number of years under Ellery, beginning in 1874. We know of Miss Davis from an 1874 article in the Janesville Gazette, which read as follows:

“There may be some in this village who doubt the fact that women are fitted for any other occupation than that pertaining to the kitchen and parlor, but we have here an illustration which will convince such unbelievers. Sometime since, Miss R.E. Davis, a farmer’s daughter who had been mastering the photographer’s art under the instruction of our village artist, E. H. Burdick, leased the rooms of her instructor and went into the business as proprietress . . . in our humble opinion, Miss Davis is fully equal to her teacher as an artist.”

According to the Bicentennial History of Milton, Davis operated the gallery for a few years before moving on and Burdick reclaimed the business. An examination of census records from 1870 sheds no light on the exact identity of Miss R.E. Davis.

The interesting aspect of the two winter photos of the gallery is that each was taken prior to the tower being constructed at the center point of the twin-peak building. There is no known record of when the tower was added.

Ellery and Phebe Burdick did not have children and Phebe passed in 1902 at 64 years of age. Four years later Burdick was in New York where he married Minerva Saberah Knapp, who was five years his senior. Prior to 1909, Burdick had stopped photographing professionally. Minerva died in June 1913 at the age of 85.

Ellery Burdick died July 24, 1919. He left behind a lasting legacy of photo documentation of the early Milton community and its people, buildings and culture. Without Ellery Burdick, future generations of this community would have little visual evidence of the young village, its landscapes and people.