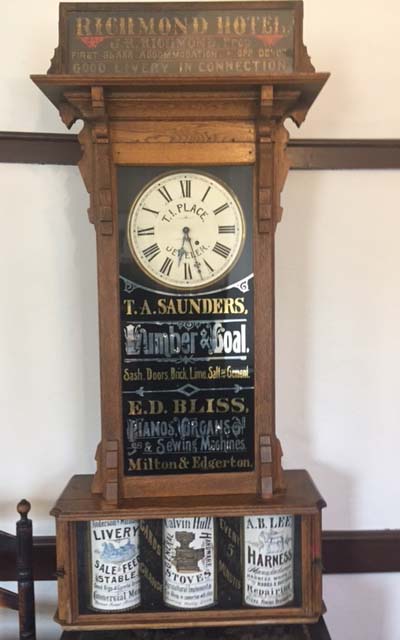 The unique Sydney advertising clock that came from the Richmond Hotel is one of the most popular artifacts in the lobby of the Milton House Museum. Manufactured by the Sydney Clock Company in New York, this style clock was a popular fixture in rail depots and hotels from the 1880s into the early 1900s.

The clock’s unique feature includes three lower panels, each displaying advertisements. Every five minutes the panels rotate to show a different ad. The museum’s clock once stood in the lobby of the Richmond Hotel. J. R. Richmond was one of last hotel proprietors of the building that stood at the south end of the Goodrich Block and later became Earl Young’s general store before being razed in the 1960s. The building operated as a hotel from about 1870 to 1915.

Now mounted on a wall in the museum lobby, the clock offers a seamless segue for docents to tell the story of A.B. and Amanda Lee with the ad for Lee’s harness shop visible on the right rotating panel. The unique and historically rich story of the Lees was covered in a previous edition of Historic Musings.

But this clock also contains a litany of names with interesting backstories of early Milton, some with legacies lasting into today’s community.

The name T.I. Place half-circles the face of the timepiece, indicating the likely seller of the clock. Thomas Irwin Place came to Milton in 1884 and operated T.I. Place Jewelry at the corner of College Street and Main Street (now Parkview Drive) until his death in 1940 at age 90. From the building that is now the home for Rockies Pizza, Place sold and serviced jewelry, watches, clocks and musical instruments. Place served on the village board beginning in 1918 and in 1928 was elected village president, a position he held for many years. Six members of the village board served as pall bearers at his funeral.

Moving down the clock, Truman Albertus Saunders operated Milton’s lumber and coal yard just south of the rail tracks for 36 years until his death in 1926 at age 82. Mr. Saunders was born in Berlin, New York in 1844 and came to Milton in 1863 to enroll in Milton Academy. In 1864 he enlisted in the Union Army and served during the final year of the Civil War. Following the war he attended Alfred University in New York, studied music in Chicago and farmed near Walworth before buying Milton’s lumber business in 1890.

Elford Duane Bliss was born in Milton in 1860 and graduated from Milton College prior to entering into his father’s farm implement business. In 1885 he began E.D. Bliss Pianos, Organs and Sewing Machines with stores in Milton and Edgerton, an enterprise he continued until his death in 1918. Bliss served on Milton’s school board for 20 years and was a member of the Milton College Board of Trustees. He was also vice president of the Bank of Milton for several years.

The final name on the clock is that of Calvin Hull. He was the son of Varnum Hull, the Seventh Day Baptist pastor who legend tells us helped Joseph Goodrich conduct freedom seekers through the Milton House. His sister was Jennie Climena Mudge, who shared Varnum’s story with Edna Dearborn. Calvin Hull was educated at Albion and Milton academies and his family farmed near Grass Lake, north of Milton Junction. A Civil War veteran, Hull started a hardware business in 1885 in the lower level of the P. of H. Hall in Milton Junction. Later he built the brick block building on the north end of Merchant’s Row in which his son, Freeborn Hull, operated an implement business for many years. The building later became home for auto dealers, including Dickhoff Chevrolet.

2 thoughts on “A Clock of a Half-Dozen Faces”